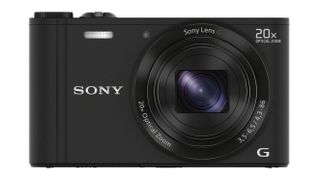 The first new superzoom camera in Sony's compact range is the Sony Cyber-Shot WX300, which is the world's smallest and lightest digital stills camera to feature a 20x optical zoom.

That lens is a high-quality Sony G lens, which the company claims has been designed to handle a wide variety of different subjects, including wide-angle landscapes and portraits. Optical Steadyshot is built in to help reduce the impact of camera-shake and reduce blur in images. Sony claims image stabilisation is now up to twice as effective as on the previous 20x zoom model, the Sony HX20V.

The speed of autofocusing has also improved, being approximately 3.6x faster than the HX20V according to the company.

An 18.2 million pixel sensor can be found onboard, along with a 3-inch, 460k dot ClearPhoto LCD screen.

Built-in Wi-Fi is included, which can be used with a smartphone as a wireless remote to control the camera. Shots can also be sent via the camera to a phone for sharing on social networking sites.

Sony claims that despite the camera's small size, its battery life is capable of shooting up to 500 stills from a single charge.

Next up, the Sony HX300 is a new bridge camera to feature a 50x Carl Zeiss Vario-Sonnar T* lens optical zoom lens.

The T* coating on lens surfaces is designed to cut reflections, while Super ED and ED glass elements promise to minimise chromatic aberration for sharper images.

A newly enhanced Optical Steadyshot is included in the camera. This helps when composing images while the camera is significantly zoomed in. The position of a second group of lens elements shifts rapidly to correct for hand movement, making it easier to frame shots.

Inside, an Exmor R CMOS 20.4 million pixel sensor can be found, along with a Bionz processor.

High speed autofocus has also been improved at telephoto settings, apparently locking onto subjects twice as quickly as its predecessor, the Sony HX300V.

The camera features a DSLR-style body, with a chunky, moulded grip which has been designed for maximum comfort. Other high-end features include a manual focusing ring, custom buttons, jog dial and Memory Recall mode.