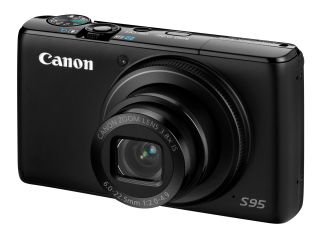 Canon has launched the latest additions to its PowerShot range, with the PowerShot S95 and PowerShot SX 130 IS both unveiled by the camera giants.

The Canon Powershot S95 is the successor to the popular S90, and is pitched at photographers looking for 'outstanding low light performance and manual control in a pocket-sized body'.

The lens control ring has been improved, and the camera features an f2.0 lens and Canon's HS System.

The PowerShot S95 is slimmer than its predecessor at 29.5 mm thick and has the same coating as the EOS 7D to improve slip-resistance and grip.

You camera supports RAW and features a 10MP CCD sensor and DIGIC 4 processing.

Also released is the cheaper Canon PowerShot SX130 IS, with a price of £199 and a UK release date in August.

"Featuring a 12.1 Megapixel sensor for large, detailed prints, and DIGIC 4 image processing, the PowerShot SX130 IS allows all the family to record special moments in outstanding quality," says Canon.

"Canon's integrated optical Image Stabiliser offers a three-stop advantage, making it easier to take great shots in low light with long exposures, and reducing the blur associated with camera-shake when shooting distant subjects at the telephoto end of the zoom."