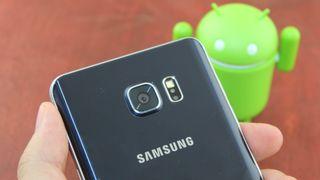 Samsung packs its Note phablets full of high-end tech and new features. The Galaxy Note 7 is expected to be the same, but alongside rumors of a curved screen and masses of power there's now a suggestion that even its notification light will get an upgrade.

According to GalaxyClub, Samsung will soon start adding a new feature to its phones, called 'Smart Glow'. This is a ring of LEDs around the rear camera lens, which can flash to alert you of notifications when your phone is face down.

But they can also be customized to light up in different colors for different types of notifications and can even help you take selfies with the rear camera by lighting up once your face has been detected and a picture is about to be taken.

This could be quite useful to anyone who enjoys looking at their own face, since rear cameras are typically better than front-facing ones, but are tricky to take selfies with since you can't use the screen to line up the shot.

GalaxyClub claims that the feature is likely to debut on the Galaxy J2, but will probably arrive on other phones as well, which makes the Samsung Galaxy Note 7 a good candidate for one of the first to get it.

Another new feature we're hearing a lot about in reference to the Note 7 is an iris scanner. This has been rumored time and again, with trademarks and even a screenshot suggesting it's coming.

But now we're hearing yet more evidence of it, as the Korea Herald reports that Patron (a South Korean camera module-maker) will be supplying modules for Samsung's "next premium smartphone", having apparently won a bid to do so months ago.

Originally this seemed like an unlikely addition, but it's a rumor that refuses to die and is now looking quite likely. With talk of a 5.8-inch curved QHD screen and 6GB of RAM alongside these features the Samsung Galaxy Note 7 could end up being the flagship to beat in 2016.