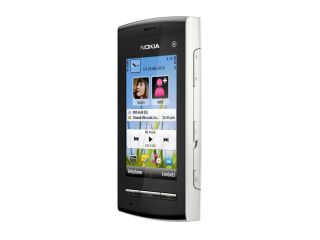 Nokia has finally announced the new Nokia 5250 – a budget touchscreen phone designed to appeal to the lower end of the smartphone market.

Set to replace the popular Nokia 5230, the new handset (which we saw earlier this month) comes with remarkably similar feature set: namely 51MB of internal storage (expandable through microSD) and a 2MP snapper on the back with no flash.

However, the 2.8-inch screen is coming in at HVGA resolution (640x360) which means movie watching will be a slightly nicer experience, and 'selected territories' will get the Nokia 5250 with Ovi Music Unlimited, which means users can download as many tunes as they like on the go.

Well, not really on the go, as this phone doesn't have 3G, nor does it appear to have Wi-Fi either – so if you're after unlimited music, it will be sideloading from your PC only.

We're still awaiting more specs, but the Nokia 5250 has been given a Q4 UK release along with that ever-so-nice budget UK price tag.