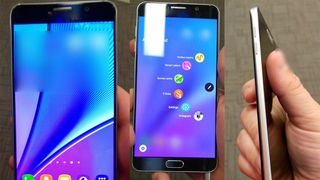 Get ready to spring for more internal storage in the Samsung Galaxy Note 5, because it won't include a microSD card slot after all, according to a new photo leak.

That means this year's 5.7-inch phablet comes with 32GB, 64GB and 126GB options, without the ability to expand its storage space, according to Droid Life.

The photos reveal no visible microSD card slot on the sides, and the metal frame and glass panels are sealed shut, just like the Samsung Galaxy S6.

There's no removeable cover underneath which you could slip in a memory card, either, which is how it worked on the Samsung Galaxy Note 4.

The Galaxy Note 5 also marks the loss of a removable battery, a key feature for some two-handed power users a year ago.

Instead, this particular 2015 Note is said to pack the 3,000 mAh battery. Last year's China variant had the same battery capacity, while the global version was 3,220 mAh.

The trade-off to all of this, if it's accurate, is that the Samsung Galaxy Note 5 is going to come in an airtight package with a premium, not plastic-clad design. And unlike the smaller Galaxy S6, it'll have a S Pen stylus.

We'll find out more about the phone and the rumored Galaxy S6 Edge, when the both phones are likely to be unveiled at Samsung's Unpacked event on August 13.