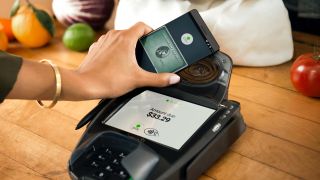 Update: Techradar now understands that the Tap 10 scheme is just for limited users at the moment in a restricted test. It's thought the feature may roll out to all users in the future.

Original: You could be the owner of a brand new Chromecast if you actually start to use Android Pay, as Google is giving away its streaming dongle as a reward to some users.

Tap 10 is the company's latest Android Pay Rewards promotion, and this time it's asking phone users to make 10 transactions through its mobile payments app by February 29.

The big prize is a $35 Chromecast after ten transactions, but there are three freebies leading up to that: A free Google Play Music song at the first, second and sixth 'tap', notes Droid Life.

All of this is an incentive for new users to begin drawing money via Android Pay, which Google hasn't highlighted nearly as well as Apple did with Apple Pay. This could help to close that gap.

Google hasn't rolled out an official press release for Tap 10, but it does have a terms and conditions page that lays out some of the rules in fine print, first caught by a Reddit user.

Notably, only US residents are eligible for this Android Pay Rewards promotion, and even then, it might not work. You 'may be eligible for a Reward', says the T&Cs offering no guarantees.

In fact, we tried to use Android Pay twice today by eating at McDonald's (for review purposes, of course) and nothing came up. You may have to wait for an update.

Also buried in the terms and conditions is the fact that transactions need to be at least five minutes apart to count. So ordering ten McDonald's apple pies back-to-back is only going to leave you with an angry stomach, not a Chromecast.