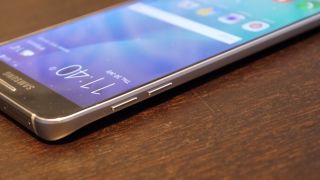 With the exception of the iPhone 7, the Samsung Galaxy Note 6, or Galaxy Note 7 as it's now rumored to be called, is probably the most highly anticipated phone still to drop this year and it could have a big new feature.

That feature is iris scanning and there's a growing amount of evidence to suggest we'll see it appear on the new phone.

Most recently a leaked screenshot, supposedly taken using beta software made available through the Samsung Galaxy Beta Program, shows a pop-up asking for a fingerprint, but the bottom right option translates to 'use iris' according to GSM Arena, which found the image on PriceRaja.

Normally we wouldn't assign too much truth to this, as a bit of text is the easiest thing in the world to Photoshop, but we know Samsung has iris scanning technology. It's trademarked the terms 'Samsung Iris' and 'Samsung Eyeprint' and more recently even packed the tech into the Samsung Galaxy Tab Iris, which is available in India.

That's not a consumer device, as it's designed for use by government and enterprises, but we can't imagine Samsung would limit such an exciting feature to that segment of the market and, anyway, the dimensions of this screenshot are those of a smartphone, not a tablet.

The Note is the obvious choice

This still doesn't confirm that we'll get an iris scanner in the Galaxy Note 7, but it would make sense. It seems like Samsung's take on the tech must be more or less ready if it's already in a device and the company tends to pack new and cutting edge features into its Note flagships.

If the new Note does have an iris scanner then it could be a hugely exciting handset, as it's also rumored to have a huge 4200mAh battery, a cutting-edge Snapdragon 823 processor and 6GB of RAM. Nothing has been confirmed yet, but everything is likely to be revealed in early August.