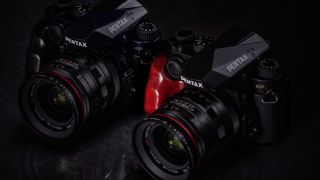 Fancy adopting the Pentax KP for your shooting but find the body a bit dull? Good news: Ricoh Imaging has confirmed its latest Pentax KP J model, just a day after images of the new DSLR leaked out.

The camera, which looks set to be a Japan-only release for now, is a minor variation on the existing KP, which was released in 2017.

The new model will be available in two finishes: black and gold, and midnight navy. Aside from the finish itself, the camera has four main points of difference from the original KP.

First, it has a custom wood grip crafted by Miroku Techno Wood, a company that makes handles for luxury cars. The black body will come with a red grip, while the navy option will ship with a black one, with both made from walnut.

The lens mount has also been revised, with the involvement of watch manufacturer Citizen. The mount now has a surface-hardening Duratekt Diamond-Like-Carbon (DLC) Coating, and a glossy dark grey finish, versus the lighter silver mount on the KP.

The third change is the removable custom top cover, which gives the body a different look but prevents the on-board flash or hot shoe from being used.

The other new addition is a U5 option on the mode dial, which recalls landscape-friendly camera settings that were chosen by photographer Kazutoshi Yoshimura. These include the Raw+ setting, two-shot bracketing, and disabled Shake Reduction.

The body is a tiny bit heavier than the KP when the wooden grip is fitted, and the dimensions are slightly different too.

Ricoh says orders will start on June 28, with the on-sale date being a month later, and you'll be able to get it from its online and physical stores, as well as its service centers. There's no word on the camera being available outside of Japan yet, although the Yen price works out at about $1,370 / £1,080 / $AU1,980.