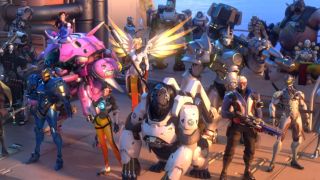 Overwatch 2 is set to be unleashed at BlizzCon this coming weekend, at least according to a BlizzCon training document obtained by ESPN (and an inside source who whispered in their ear, to boot).

The supposed sequel, which has seen several rumors flying around in the past, will include new game modes and PvE content, as well as new maps and heroes, ESPN revealed.

Apparently there will be a major focus on story and narrative elements, and the PvE (cooperatively fighting computer-controlled enemies, as opposed to fighting other players or PvP) will throw a four-player squad into a full-on ‘story experience’ set in Rio de Janeiro.

ESPN reckons that this PvE effort will be available to play at BlizzCon, along with a new game mode called ‘Push’ (and one new hero will be playable, too).

Apparently Push will take place on a new map which is based on Toronto, and it will be available alongside the existing Assault, Control, Escort, Hybrid game modes.

No details were revealed about what Push might actually involve, but to hazard a guess from the title, it likely involves pushing a payload into enemy territory by taking control of it (and avoiding having it pushed into your territory).

The author of the ESPN story later tweeted that there is the distinct possibility that the game won’t actually be called Overwatch 2, but maybe something like Overwatch: Chapter 2 (indicating that it’s not so much a full-on sequel as a progressive expansion of the game, albeit a major one).

to clarify from my original tweet, it is very likely the next iteration of Overwatch will not be 'Overwatch 2', but instead a variant of 'Overwatch: Chapter 2' https://t.co/RVkjrZisuYOctober 27, 2019

A previous recent leak from a streamer (Metro) who has at least some form in getting things right regarding Overwatch spillage claimed that the sequel would be both a PvP and PvE game, and that it will introduce a full levelling system whereby the heroes can unlock abilities as they progress (potentially only for PvE – but who knows). This is further backed up by images which were leaked by Overwatch YouTuber Stylosa, to boot.

Ultimately this is all still speculation, but ESPN’s revelations do seem to have a distinct ring of truth about them.

Previous rumors about Overwatch 2 from a few months back include the fact that Blizzard ditched a sci-fi shooter set in the StarCraft universe because it wanted to deploy those resources to concentrate on making Diablo 4 and Overwatch 2 instead.