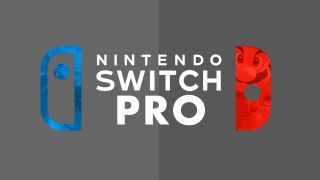 Rumors have been circling for a while now that a Nintendo Switch Pro could be on the cards in the near future - and it seems now, more than ever, that this speculation may actually have some weight to it.

While we had technically seen two new Switch devices release in 2019 - the Switch with longer battery and the handheld Nintendo Switch Lite - we're still expecting Nintendo to have another, more premium, Switch up its sleeve.

This new Switch (or Switch Pro) would boast upgraded hardware in comparison to the original Nintendo Switch, potentially offering better graphics and processing power, among other improved features.

There's been speculation that this Nintendo Switch Pro could launch sometime in 2020. But, with Nintendo not even confirming the existence of a Switch Pro, how likely is that release window? And, if the rumors are true, what features would this new Switch likely offer? While we wait for more definitive answers, let's run through the likely (and unlikely) possibilities below.

Last year, Nintendo released two new Switch devices: the Switch Lite and the Nintendo Switch with improved battery life. However, we're still expecting the House of Mario to have yet another new Nintendo Switch up its sleeve.

Last year, a Wall Street Journal report suggested that - in addition to these new devices - there's also a premium Nintendo Switch console on the way: potentially a Switch Pro. While we're treating these rumors with caution, the report did correctly predict the release of the Switch Lite, adding more weight to this speculation. But when could we see this new Switch?

According to a report by DigiTimes, we could be seeing the Switch Pro much sooner than we expected. The report claims production will start "at the end of first-quarter 2020"- with the console itself releasing in mid-2020. That would see production starting by April, probably in March.

DigiTimes claims this information comes via "sources from the related upstream supply chain".

The report lines up with the predictions of Dr. Serkan Toto, CEO of Kantan Games, who told GamesIndustry.biz that he believes the Switch Pro will definitely release this year.

"There is absolutely no doubt in my mind that Nintendo will launch a 'Switch Pro' in 2020, my guess is at $399. More specifically, I predict 4K support, bigger cartridge sizes, and of course beefed-up components. I also think the device will launch after the summer holidays to counter the roll-out of the PS5 and next-gen Xbox later in the year - along with a first-party, system-seller game."

But what do we at TechRadar think? Based on these industry trends, it would make sense for Nintendo to release an upgraded version of the Switch hardware (or a design) between two and three years into its lifetime, which would mean we could see another new Switch in 2020. While the Switch lite focuses on redesign, we think a second new Switch would focus on hardware improvements.

We'd expect Nintendo to release the Switch pro before the Xbox Series X or PS5 hits shelves at the end of the year – likely in mid-2020 – lining up with DigitTimes' report. This would allow Nintendo to have a new console on the shelves for the Christmas period, without directly competing with Sony and Microsoft.

Dr Toto suggested a price tag of $399, which seems a good estimate. After all, the PS4 Pro is $100 more than the PS4. The price mark up takes into account the improved hardware without being prohibitive. However, this is Nintendo we're talking about, and we wouldn't be surprised to see a Switch Pro cost a tad more than that.

Nintendo may not have officially announced the Switch Pro, but we've gathered all the biggest news and rumors surrounding the new Nintendo Switch right here for your perusal.

Production rumored to start as soon as April
According to a report by Taiwan newspaper DigiTimes, mass production on a new Switch will begin much earlier than we expected. The report claims production will start "at the end of first-quarter 2020"- with the console itself releasing in mid-2020. That would see production starting by April, probably in March.

DigiTimes claims this information comes via "sources from the related upstream supply chain".

In addition, the report claims this new Switch will sport a magnesium alloy body and a CPU update.

No Switch Pro in 2019
At a press briefing for the announcement of the Switch Lite, Nintendo president Doug Bowser revealed that we wouldn't be seeing another new Switch model in 2019, according to CNET.

However, Bowser's comments suggested an upgraded Switch model is on the way, perhaps a Switch Pro?

Two new Nintendo Switch devices
A Wall Street Journal report suggests that Nintendo is working on two individual Switch variants that, rather than making the current Nintendo Switch obsolete, would put it in the middle of a range growing to suit all budgets.

According the publication's sources, the first of these new devices will be aimed at budget gamers, and will see the Switch presented in a more traditional handheld-first format. It'll replace removable Joy-Cons with fixed ones, and ditch their HD Rumble feature in order to bring costs down. This was confirmed with the announcement of the Nintendo Switch Lite.

The second new version of the Nintendo Switch, going by the rumor, is a little harder to pin down, but would be a premium version of the console with "enhanced features targeted at avid videogamers." That's not to suggest it would be aiming for 4K or HDR visuals, but would more likely have features and services baked in that would accommodate the modern obsession with streaming to platforms like Twitch.

The confirmation of the Switch Lite adds some weight to this report and could mean we will see another new premium Switch console at a future date.

The 5.0 firmware dig
Though the Nintendo Switch’s 5.0 firmware update wasn’t up to much on the surface, hackers on Switchbrew dug into the upgrade in 2019 and found evidence which suggests a hardware refresh is in the works.

Switchbrew discovered references to a new T214 chip (which would be a small improvement on the current T210) as well as an updated printed circuit board and 8GB of RAM instead of the current 4GB. This T214 is likely what was used in the Switch Lite and improved battery Switch, but we're expecting the Switch Pro to have even further hardware improvements that will push the devices overall performance.

AR and VR support
VR and AR support for the Switch never looked likely, with the MD of Nintendo France citing a lack of mainstream appeal for the technology back in 2018, but the Labo VR Kit shows Nintendo has changed its mind about the viability of VR.

The Switch doesn't have the high resolution of most VR gaming rigs, so we could see an advanced model with 2K or 4K resolution to improve those close-up VR experiences. However, given the VR Kit is still focused mainly on children, we'd be surprised to see a visual overhaul simply for this one peripheral.

What about 3D?
Another Nintendo patent came to light in early 2019: this time for a 3D sensor array that sits above your television, and creates a stereoscopic image in a similar way to the 3DS, meaning you wouldn't even need glasses.

3D visuals felt like a passing gimmick even with Nintendo's handheld consoles – and the troubled Microsoft Kinect camera will no doubt keep it wary of unnecessary TV peripherals. But getting convincing 3D imaging on standard 2D TVs may the step needed to bring 3D gaming mainstream.

Could it support 4K?
While Sony and Microsoft push at the 4K market, there isn’t really any big reason for Nintendo, the company that staunchly sets itself apart from other hardware producers, to follow suit.

In the same interview where he dismissed VR, Nintendo France General Manager Philippe Lavoué also brushed off 4K saying that the technology has “not been adopted by the majority” and it would, therefore, be too early for Nintendo to jump in.

Nintendo didn’t enter the HD console market until 2012 when it released the Wii U. This was around four years after Sony and Microsoft and at the point when more than 75% of US households actually had HD displays in their home.

Miyamoto however has said he wished Nintendo had done the jump to HD sooner than this, saying that the display technology became popular around three years before Nintendo expected it to. It's expected that by 2020, 50% of US households will have adopted 4K technology and it might be at this point that Nintendo decides to join the 4K fray, rather than waiting until the 75% market saturation of before.