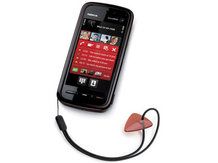 The Tube: one of Nokia's top 3G handsets

Nokia's ongoing dispute with Qualcomm will cost the Finns over £1bn to settle out of court, it has emerged.

The two companies have been locked in a royalties dispute over how much Nokia should pay the chip-maker for use of its chips to connect to 3G networks, and how long said license should run.

But, in a bid to stave off long-term harm in an unstable mobile phone market, the two have decided on the massive number, with a deal that will run for the next 15 years.

By that time, we'll all have become psychic and will no longer need mobile phones, so the deal will be moot.

Qualcomm makes chips designed for 3G networks, which Nokia has still yet to fully exploit, so the ending of this lawsuit should help accelerate production of such devices.

The money will be paid in Q4 this year, so Nokia will be entering 2009 with a big hole to fill... expect to find yourself buying one of its handsets without knowing why.