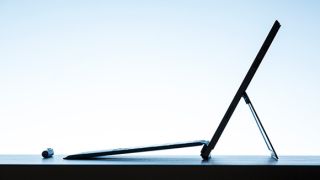 The Surface Pro 3 is a handsome tablet indeed

Microsoft has unleashed its cavalry in the battle of big tablets in the form of the Surface Pro 3, its most impressive and desirable tablet yet.

But is it enough to draw the eyes of the masses from the iPad Air and even the Samsung Galaxy Note Pro 12.2?

As phones continue to get bigger, the same is true for tablets, and the space for 10-inch plus slates is getting more and more crowded.

So which big tablet has what it takes to beat the other two?

Meanwhile the iPad Air measures 9.4 inches and 7.5mm thick, making it the thinnest of the three tablets. It weighs just 469g as well.

The Surface Pro 3 has a beautiful 12.2 inch screen with the uncommon aspect ratio of 3:2 and a dense 2160 x 1440 resolution. Whether the aspect change from the Surface 2's 16:9 is a good or bad thing will have to play out over the long run as we see how the OS and apps perform.

The iPad Air's 9.7-inch 2048 x 1536 LED display with IPS may be more dense than the Surface Pro 3's, but that has more to do with its smaller size than its comparable resolution.

The Surface Pro 3 lets users choose between an Intel Core i3, i5 or i7 processor and up to 8GB of RAM. The default i5 is clocked at 1.6GHz but can Turbo Boost up to 2.9GHz.

Apple's iPad Air comes with the company's own 64-bit A7 chip, designed to conserve battery life while improving performance over past iPads.

Microsoft has yet to specify the Surface Pro 3's battery in detail, but we do know that it's supposed to run for approximately 9 hours, 20% longer than the Surface Pro 2's.

The iPad Air's roughly 8,820mAh battery has it beat with an estimated 10 hours of active use, and the Galaxy Note Pro 12.2's is even better at 9,500mAh and a reported 13 hours. Naturally, battery consumption varies wildly with use, and the differences among these three may well prove negligible.