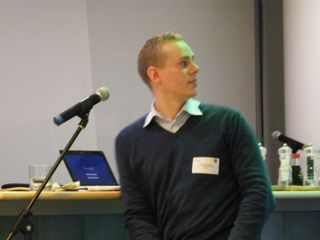 Google has given the strongest hint yet that there will be touch options for Chrome OS.

During a talk attended by TechRadar at Google's London HQ, Anders Sandholm, Senior Product Manager of Search based in Aarhus, Denmark, was clearly at a loss as to how to answer a direct question about touch without giving something away.

When asked the question, Sandholm looked to a PR helper, chuckled nervously and said "I can't... I mean... right now we are targeting netbooks, that's what we're focused on, but I expect it to work well... we expect it to target everything up to desktop computers.

"Chrome OS will be built for a specific hardware setup."

Rumours have abounded, some saying that HTC is already testing a Chrome OS tablet, others saying that an official "Google netbook" will have a 10.1-inch multi-touch screen.

This is a change in tone from two months ago when Sandholm told TechRadar, "I'm sure that something is being discussed [about touch input], but I'm not exactly sure what the outcome is going to be,"

And as for the variety of devices that will be available with Chrome OS from launch, Sandholm said "That's still being discussed with our OEM partners. For sure the first devices will be netbook-based."

Chris Dibona, Head of Open Source at Google said Google was definitely working with Asus, Acer, HP "and maybe MSI" when quizzed about the companies Google was working with.

Rumours of touch-based Chrome OS devices hitting the market have been common, but nothing has been confirmed by Google, evidently keen not to appear to be getting ahead of itself.

Sandholm added that Chrome OS was emerging in a time that represents "a perfect storm of converging trends" caused by a need for cheaper machines, the rise and rise of netbooks and the amount of data now stored in the cloud.

"Now most work is done in the browser," added Sandholm. "Rather than just building a browser, we thought why not try to recreate the operating system itself? In many ways it's something completely different [from the Chrome browser] but it's the same in that were going for speed, efficiency and security."

Sandholm wasn't convincing when asked how Chrome OS responds to not being connected to the internet – does it work? Surprisingly, he said that "the simple answer is that it doesn't" when HTML 5 is specifically designed to perform many of the offline functions that Google Gears has done – such as offline email browsing in Gmail.

"We hope people will get excited about it and improve it and find mistakes and tell us about [them]," added Sandholm. "We are also hoping to push hardware vendors to have more open source drivers."

TechRadar also spoke at length to Chris Dibona about all things Android, Chrome OS, Wave and more - we'll publish a full interview with him next week, so keep checking back for your next Chrome OS fix.