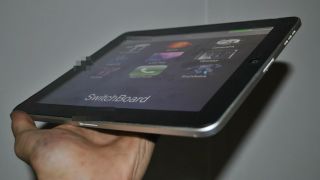 Aging iPad - sittin' on the dock of the bay

That's a pretty penny to pay for an iPad that is, in typical eBay style, "fully functional apart from the touchscreen, which may or may not be able to be fixed". A touchscreen-less iPad doesn't sound massively functional to us, to be honest.

But for their money, the buyer has got a very rare tablet – the first-gen iPad tester unit comes with two dock connectors.

One where you'd expect to find it just beneath the home button and one on the long-side – presumably Apple was mulling landscape docking but decided against it.

It also comes with SwitchBoard, Apple's software testing suite which the company disabled but the eBay seller has refurbished as far as possible.

One thing's for sure, willingness to pay £6,500 for the prototype iPad really sets the true fanboys apart from the regular Apple-loving milieu.

We can only hope that such an ardent fan won't have to worry about a visit from Apple's lawyers demanding the tablet be returned - although at least then they'd know the iPad is legit. Small compensation.

From eBay via AppleInsider