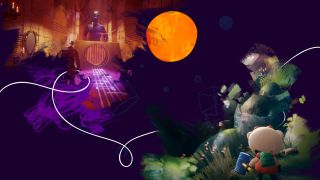 Turn on your console today and you’ll find a rich library of games that put game-making into the player’s hands. Super Mario Maker 2 and Dragon Quest Builders 2 are just two recent critically acclaimed examples, while Minecraft is now the best-selling game of all time.

Of course, this has its history in the modding culture on PC and dates further back to computers like the Commodore 64 which, besides its own software library, allowed anyone to program their own games, giving birth to the bedroom coders of the 1980s.

But these coding options didn’t really exist for the games console, not least because these were considered more as entertainment for your living room TV rather than a workstation. This all changed with LittleBigPlanet on the PS3, its creators Media Molecule headed up by ex-members of Lionhead, a studio that embraced a culture of tinkering with technology and giving players agency.

“We believe that people like expressing themselves in lots of different ways, like gardening, sewing, or making music,” says Siobhan Reddy, Media Molecule co-founder and studio director. “The idea was to give players a home to build upon those experiences they had with the Commodore 64, Lego, dress-up - all of these things that we all collectively, individually loved, and bring that to a console experience.”

Back in 2006, pitching LittleBigPlanet as a platforming game where you could also create and share your own levels actually came at a good time, as it coincided with the rise of user-generated content-sharing platforms like MySpace, Flickr, and YouTube - though there were doubts along the way.

“I think what became more challenging as time went by was people believing that we would be able to build a creative community,” says Reddy. The true test came with the game’s public beta a month before launch, which she recalls watching the results from their conference room screen.

“We knew it would take about half an hour for someone to get through the first bit of the game that would unlock Create,” Reddy explains. “So the clock's ticking down and we're thinking, 'will someone publish something?' And then when we saw that first creation, we're like, okay, all right. And then it just followed and flowed.”

LittleBigPlanet allowed for an incredible breadth of player expression and customization in both its adorable mascot Sackboy and its levels, yet it was also within the constraints of a physics-based platformer. By the time the team had shipped LittleBigPlanet 2 in 2011, they were ready to break free of those constraints for something far more freeform and ambitious, which brings us to Dreams.

No dream too big or small

Currently available in early access on PS4, there’s no simple way to describe Dreams. Sure, you can use it to create your own games, while the final version will also include a fully playable campaign, but it’s really a rich smorgasbord of creation tools comparable to Photoshop, Blender, Garage Band, and YouTube, albeit in a playful form using either the DualShock 4 or PlayStation Move controllers.

And while the infinite possibilities can seem daunting for anyone with blank canvas syndrome, the beauty is that you can enjoy Dreams purely by noodling and tinkering with just one element.

There may be people who still want to make their own solo projects, but whether you’re interested in creating beautiful environments or interesting character models, the creations become their own reward in the Dreamiverse, with one such favorite trend of Reddy’s being the abundant variety of animals that players are making.

“I particularly love the pelican,” Reddy says. “And now someone’s made a couple of little games about the pelican, and I love that it’s gone on to have a little life of its own. That’s the dream - that people would riff on each other’s ideas they share.”

There’s also an abundance of support both from in-depth tutorials that cover the basics to masterclasses, as well as from regular community jams to encourage you into the various available pathways.

“You can come into it and just collage a game together, but what I’m also noticing is that people are dipping their toes a little bit more into logic or animation,” says Reddy. “It might be that you always stay on the collage, or it might be that actually you sort of incrementally learn different aspects of game development, or sculpture, or animation, or music. Wherever the mood takes you, we want to provide a pathway.”

Care in the community

To an extent, Media Molecule has evolved from a traditional game developer to tool creators, as well as curators and moderators, fostering and facilitating a creative community.

There’s probably an advantage to shaping this community early on, in smaller numbers in early access, to prevent the trolling or toxicity that can plague other games. According to community manager Abbie Heppe, Dreams already benefits from having a positive community from the outset. After all, the most common words used among the community have been ‘love’ and ‘thanks’.

“I think part of that is driven by the fact that people are doing creative things, and they need to put themselves out there,” says Heppe. “You see that in professional congresses too. People need that sort of support, feedback, and encouragement from people around them. It makes people think about how they react and respond to others.”

Dreams is certainly the most ambitious sandbox for creating just about anything you can think of, but Reddy also modestly refers to it as just one of many other creative experiences, especially where today even traditional games are featuring creative modes of their own, whether it’s Overwatch, Fortnite or even Assassin’s Creed Odyssey.

“I think as much as there's always been a hunger for people playing games, there's also been the fact that people like putting their own imprint on the games that they play,” Reddy explains. ”I love the fact that this generation is growing up where it's completely normal to have creativity as part of their game experiences.

"It's really awesome that we're a generation where that's really celebrated, because it’s obviously something that we love.”