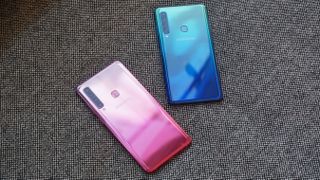 After the launch of the India-centric Galaxy M-series, Samsung is gearing up to refresh its Galaxy A-series with three new smartphones. According to a report by MySmartPrice, the South Korean electronics manufacturer is readying the Galaxy A10, Galaxy A30 and Galaxy A50 for launch really soon. The Galaxy A30 and Galaxy A50 could also be the very first smartphones from the company to launch with the infinity-U notch design. The Galaxy A10 will still feature the infinity-V waterdrop notch as we have seen on the Galaxy M series.

The report by MSP reveals that all the three smartphones will have a plastic construction which indicates that these three phones could be priced in the Rs 18,000 to Rs 25,000 segment. The Galaxy A10 will be the most affordable out of the three phones featuring a 6.2-inch HD+ display and a waterdrop notch design. It is powered by the company's proprietary Exynos 7884B chipset with an octa-core CPU clocked at 1.6GHz and backed by 3GB RAM and 32GB onboard storage.

All the three smartphones have a 4,000mAh battery at their disposal but the Galaxy A10 does not support fast charging while the Galaxy A30 and Galaxy A50 do.

Moving on to the Galaxy A30, it features a 6.4-inch Full HD+ (2340 x 1080 pixels) AMOLED display with the infinity-U notch design on the front. This notch design gives the phone an aspect ratio of 19.5:9 and is pretty much in line to what is currently being offered in the smartphone market.

The A30 has a dual camera setup on the back which consists of a 16MP primary camera with f/1.9 aperture and a 5MP secondary ultra-wide camera which has an f/2.2 aperture. It is powered by Exynos 7904 chipset with an octa-core processor. We have previously seen the Exynos 7904 in action on the Galaxy M20 which was launched last month in India. Buyers can choose between two different configurations, with 3GB RAM and 32GB storage or with 4GB RAM and 64GB storage. The phone supports microSD cards for up to 512GB for memory expansion.

Samsung Galaxy A50 looks like the high-end version in the A-series and features the same 6.4-inch Full HD+ display and infinity-U notch design. It has a triple camera setup on the back which includes a 25MP primary sensor, a 5MP depth-sensing camera and an 8MP ultra-wide camera. There's a 25MP front-facing camera for selfies as well with an aperture of f/2.0.

Powering the A50 will be the Exynos 9610 chipset with an octa-core CPU clocked at 2.3GHz backed by 4GB/6GB RAM and 64GB/128GB onboard storage. Users have an option to increase the storage capabilities of the phone by up to 512GB using microSD card. Another interesting thing about the A50 is that it will reportedly feature an in-display fingerprint sensor which is expected to make an appearance first on the Galaxy S10 lineup due on February 21.