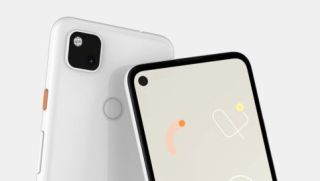 The Google Pixel 4 series disappointed many potential buyers with a rather small upgrade at a not-so-small price tag. Leaked renders of the Pixel 4a suggest that Google might fix some of those with its upcoming mid-ranger.

Earlier this year, Google unveiled the Pixel 3a, which brought the legendary Pixel cameras and software experience to the budget segment, and went on to become a better-received smartphone in many markets. Considering that the Pixel 4 wasn’t a runaway success this year and didn't make it to India, we expect Google to try and improve the more affordable Pixel 4a and win back the lost customers.

91mobiles was able to get its hands on a bunch of renders of the upcoming Pixel 4a, giving us a good idea of what to expect. The biggest perceivable change comes with the display, as it seems to adopt a taller (than Pixel 3a) display with a punch-hole notch for the selfie camera instead of the aging thick forehead approach we saw on the Pixel 4. This pretty much confirms that the Project Soli array of sensors, and Motion Sense, are gone. While that may seem like a downstep, it will make the Pixel 4a eligible to be sold in countries such as India.

The existence of a fingerprint scanner on the back strengthens this presumption. The back on this particular model has only a matte finish throughout, with the familiar squircle camera bump on the top left corner. Only a single camera sensor can be seen in these renders, but leakster OnLeaks suggests that there will be additional sensors. If the same design makes it to the final units, then the other sensor could be a Laser AF module which is usually indistinguishable from a black surface. The bottom will house the USB Type-C connector while the headphone jack makes a comeback, on the top.

Internal specifications weren’t a part of the leak, but there are a few details that we expect to be present on the Pixel 4a. For starters, the Snapdragon 730 or 765 are the likely candidates to power this device, along with at least 4GB of RAM and 64GB of storage. The same 12.2MP primary camera on the back, and a battery in the range of 3,000mAh. Perhaps, we will also see 5G capabilities.

The Pixel 4a might be the only way India gets to experience all the latest photography capabilities of the Google phone.