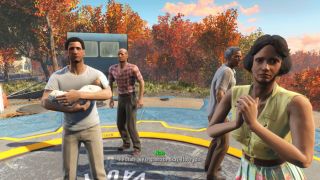 There's been something of a trend in games over the last few years which is usually referred to as 'daddification'. In short, not simply games about fathers, but games rooted in fatherly fears and concerns – by which I mean of course looking after a younger, typically female character, such as Clementine from The Walking Dead or Eleanor/Elizabeth in Bioshocks 2 and Infinite.

As opposed to other fears, not least the whole 'zombie' thing – or in the case of the new Fallout 4, suddenly waking up in a post-apocalyptic wasteland with nothing but a blue jumpsuit and the PIP-Boy, the single worst piece of consumer electronics this side of the Amstrad E-m@iler.

There are a few reasons for daddification, including traditional gender stereotyping making female characters (unfairly from multiple angles) seem more protectable than a male one, who would be expected to sack up and then step up to the horrible situation.

Others include male developers getting older and having families, and experiencing the fears that come with both, and the fact that if the player is going to look after someone, it may as well be a hot gal in a corset like Elizabeth, or an adorable innocent like Clementine – at least until she achieves her destiny as Queen Clem of Zombieland.

For the most part, it's honestly not a bad trend – stepping away from guts and glory to take a more protective and mundanely heroic role, with the side benefit that as a result the protectee will usually develop at least some kind of awesome superpowers, instead of dropping out of university and spending years of their life dreaming of one day managing a carpet warehouse.

The main problem with daddification tends to be that in making plot lines about dads, the mums usually get somewhat sidelined to various degrees – either not being there at all, as with so many Disney parents, or more awkwardly pushed into different roles. Heavy Rain, for instance, is entirely focused on a father trying to save his son, with the son's mother largely becoming antagonistic for wanting the police to handle it instead of her increasingly crazy ex-husband running around town shooting people and cutting off body parts as part of a serial killer's sick game. Tsk. What a shrew.

Fallout 4 has to be one of the weaker attempts at the genre though, albeit with bonus points for allowing a choice of parent instead of going Full Daddy. It's particularly notable coming in the wake of The Witcher 3 earlier this year, which was also a very 'daddy' game – monster-hunter Geralt stopping at nothing to find his adopted daughter Ciri in a war-torn land, unless by 'stopping' you include sleeping with multiple sorceresses and playing card games. It still worked because each quest, each card, each roll in the hay was more or less a step towards that goal – pursued not with a younger man's passion but an older one's patience and experience.

Jump from that to Fallout 4, and it's hard not to see it as an exploration of being a terrible, terrible parent. "Oh no," your character will bemoan, "My child has been taken and could be… what's that? Power armour? ****ing YES!"

Some bad parents may leave their kids in the car. In Fallout 4 you're openly encouraged to not worry about the kid, who's probably fine or dead or whatever anyway, but instead to dress up like an extra in the new Mad Max film and rebuild civilisation with your own hands. Not really exaggerating. The people you're with have had literally centuries to tidy up after the bombs and stop living in filth, but nope, until you come along they've not even bothered to take the skeletons out of the bathtubs.

Of course, if you follow the main story, your character gets a touch more caring – occasionally even expressing sorrow amid lines like, and I quote, "In my secret club, the codephrase is just two words. Awesome and Me." and "I'm here to pick up an order. Two large pepperoni and a calzone. Name is '**** You'." These are on the main story path, incidentally, in which your character can also be told that the only people who can help them are in the Underground Railroad for Replicant synths, and reply "Next stop: the Railroad. Choo choo!"

Urgh. The Daddification of Games is one thing. We don't need the Dad Joke-ification of them too. Especially in an RPG. Hell, no. Fifty hours of that kind of thing will melt your brain to sad, whimpering goo faster than the final series of Da Vinci's Demons. Almost, if not quite.

For the most part though, Fallout 4 acts as an example of how not to do this – a game both with so many distractions that the emotional core gets lost, and where most of the writing hasn't been done with it in mind. It's not that the other characters you meet generally don't care – there's no reason for most of them to give priority to your problems – but that something like parental protectiveness can't just be switched on and off, as proven by the fact that most kids live past the time they learn how to sing. When not done properly, it doesn't add an emotional core to the game so much as completely destroy any sense of humanity that the story might have had.

Fallout 3 for instance did a far better job of imbuing its quest with feeling, despite not really trying. Nobody particularly cared about finding their father, as played by Liam Neeson on his way to a job he actually wanted to do, but that didn't matter. The general themes of being forced out of normal life all resonated, especially when you were wandering through a quiet part of the desert to the sound of lyrics like Bob Crosby's "I'm a weary exile, singing my song of loneliness…"

It's frustrating, because while some elements of a game can simply be overlooked and ignored, like for instance the main quest in just about every other Bethesda game, here it feels like it should be such a fundamental part of the experience and the main character's journey that having it restricted to just a handful of missions where they suddenly remember they're grieving both makes it artificial and the characters more unlikeable, whether it's the parent or their new friends showing all the emotion of the complaints desk at a sociopath convention.

(Though in retrospect, that might be best, given that when they do get cross we get lines like "In a hundred years, when I finally die, I only hope I go to Hell so I can kill you all over again.")

All that being said, baby steps. It's certainly not a bad thing that AAA games have their sights on more emotional and meaningful types of stories than the average cinematic equivalent, helped by the fact that interacting always provides more of a sense of intimacy than simply watching – a story can be junk, but if you can get behind the characters, it becomes something very different.

The Walking Dead lucked into that more than most, with plans having been afoot not that long before the design was locked down to get rid of Clementine entirely, fearing that players would just be annoyed. In practice, she quickly became not only the break-out success of the series, but was promoted to main character for the second one, having gone from being coddled and protected to a more or less equal member of the team (except when the writers forgot that, of course) and ultimately taking on the protector role herself, to another little girl without her resilience, and to the adults in the group as their psyches finally buckled under the strain of surviving another day in the perpetual death march that is life in The Walking Dead.

To make any of it work though, a game has to commit. You can't just dangle one of the most primal human emotions in and out of an experience, or treat it as simply flavouring. If it's appropriate for Fallout, it's only because much of the game revolves around the Replicant style synths; the fear of being replaced, of machines with human faces walking around. It's one thing to wonder if your character might be one of them… but it becomes a problem if it's the only real explanation for why they're so damn creepy, regardless of how you play or what you choose to say.