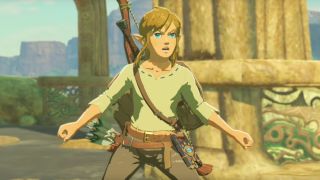 Nintendo has revealed a kick-ass trailer for the new Zelda game, and even christened it with a name - The Legend of Zelda: Breath of the Wild.

The trailer alone has plenty to sink your teeth into, but that's just a fraction of what Nintendo is showing off at E3. There is, however, one particular moment of the video I want to talk about.

At around the two-minute mark of the trailer we see Link using a big glowing horseshoe-shaped item called a Magnesis Rune to pick up a plank of wood.

"Just a cool new item from the game," you're probably thinking, and indeed that's probably all it is. But what if there's a bit more to it? What if this is actually a hint at something on the Nintendo NX which the game will also be launching on?

In April, we wrote about a horseshoe-shaped controller than Nintendo had patented in 2014, when the company was teasing its Quality of Life program. Here it is:

I mention Quality of Life because the patent makes specific references to fitness, and it's possible that this is all it was to be used for - until the Quality of Life project got put on hold indefinitely.

But there's a question over whether there's a connection between this and the item we saw in the Zelda trailer.

I'm 50/50 on the whole thing. Nintendo has promised something radically different with the NX, so I'm open minded to the idea that there's a link here.

Of course, it's not the only controller patent we've seen - this one looks very different to the magnet-shaped controller - but it's possible we could be looking at another peripheral that won't actually be the main input controller.

The patent for the horseshoe controller reads: "The main object of the present invention is to provide a novel training equipment, training system and an input device,"

So, it's a multi-function idea that could be used for gaming as well as fitness. Alternatively, this description could be out of date and the device has have transformed into something else by now. Or the whole thing is just a coincidence.

There's another angle to this, too. In the gameplay footage we see Link waking up to pick up what is called the Sheikah Slate, a technological device that you'll carry throughout the game.

The Slate has a glowing center that is presumably meant to correspond with the Wii U gamepad, so does this mean the NX controller will have a screen too?

Not necessarily, but there's a lot of speculation that the NX controller will be a fully portable device, so it would make sense. Which maybe leaves the horseshoe… thing as another peripheral, maybe with an added fitness aspect.

If anyone else has any straws for me to clutch wildly at, do let me know in the comments below.