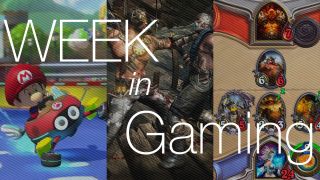 Hello, and Baby Park. I hope you all had a good Baby Park, and didn't stay up too Baby Park! It's time for this week's rundown of Baby Park news, featuring all the biggest Baby Parks, the best Baby Parks and the rumours of upcoming Baby Parks. First on the list, as you can probably guess, is the release of Mortal Kombat X.

With gorier fatalities and frankly disgusting brutalities in tow, Mortal Kombat X promises to treat anyone with a talent for combos to the most spine-snapping, skull-smashing fighting game yet. If you can see past the pile of vomit that you involuntarily spewed forth when you saw that fatality with the knives in the eyes and all the blood, then you'll see things like… well, you'll see more fatalities. But also an extra vault mode filled with jump scares and dead bodies, a tower mode which involves chopping successively more solid objects in half and a faction mode that I… don't understand yet.

If you're less about pulling someone's spine out through their belly button and more about thinking very carefully about which attack card will cripple your opponent the most enjoyably, then good news for you: lovely Hearthstone, the World of Warcraft tie-in strategy card game, has finally come to phones! The cards may be smaller, but that doesn't make them any less powerful.

Okay, right, I've done the joke for long enough now, I just want to talk about Baby Park. BABY PARK. If you are reading this and thinking, "what is Baby Park? Is Kate obsessed with swings and slides now? That's weird," then let me explain: Baby Park is the best Mario Kart track that ever existed. Keep your Bowser Castles and your Yoshi Valley - the only real Mario Kart race is a fast-paced, chaotic, shells-bouncing-all-up-in-your-face 7-lap bonanza on the Baby Park track. It's short, it's simple, but it separates the Marios from the Baby Marios. It was on Double Dash, the controversial GameCube Mario Kart game, which was - in my opinion - the best one.

And it's coming back. Baby Park is back! Along with a bunch of other old tracks, new tracks and characters including the charming Isabelle and the creepy Villager from Animal Crossing, and the rather thirsty-looking Dry Bowser, three new rides to pimp, and did I mention Baby Park? BABY PARK.

In other, less Baby Park news, we've got a better idea of what to expect from the new Star Wars Battlefront. Playable Ewoks are still unconfirmed, but you can play as... actually, you know what? Just watch the damn trailer. We're not asking, we're telling you.

Also, GTA V has finally come to PC and already the PC community are all "ooooh mods" and "we hacked into the code, did you know there are horses" and the rest of us console folk are hunched over our buttony controllers mumbling "silly WASD peeps, we was 'ere first". They also get this cool movie maker, called the Rockstar Editor, and they've been having quite a lot of fun with it. WELL, FINE. I DON'T CARE. I USE MY COMPUTER FOR WORD PROCESSING AND EMAIL, AND THAT'S THE WAY I LIKE IT. Here are some of my favourite fan-made movies so far.

This one might as well be "Forrest Gump 2: The Gumpening"

Pretty sure this one is the plot of Baywatch

Still better than Dead Island turned out to be:

This one's the entire Drive intro because people are stupid and amazing and talented.