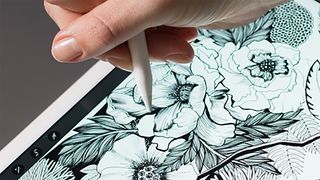 Another day, another rumor that we'll be seeing an iPhone with Pencil support - but could that really be about to happen with the new iPhone this year?

The obvious reason for this to never occur is Steve Jobs famously stating that the iPhone would never use a stylus, in proclaiming the finger is the perfect tool for the then-new iPhone.

But that was in 2007, and since then we've had the rise of the Galaxy Note, which obviously supports the S Pen stylus, which lives in a little slot in the corner of the phone.

Now, the rumors keep swirling: today analysts at Rosenblatt suggest that the new large iPhone X model will support a stylus, according to AppleInsider.

Apple has applied for patents on an iPhone stylus, and since the launch of the iPad Pro with Pencil support, questions have arisen over whether we'll see an iPhone follow suit.

Were this to happen, it would almost certainly be a smaller, dedicated input device to let you carry it around more easily, but we doubt Apple would ever make a slot for the stylus on the phone.

Some might say that this is going against Steve Jobs' wishes for the iPhone, but the way we use our phones (and the things we can do with them) has changed dramatically in 11 years, so it's only fair that we might consider new methods of interaction.

A large-screened iPhone would be a great digital canvas for sketching and note-taking, and the Galaxy Note range has shown there's an appetite for such a capability.

With the higher amount of pixels on offer with these pin-sharp screens, a new, more accurate method of interaction would make sense.

Although, even if this does come to pass this year (or next, according to other rumors) it's unlikely to be a cheap accessory, given the iPad's Pencil comes in at nearly £100 / $100, so you'd have to work out just how much you'd want to upgrade your finger.