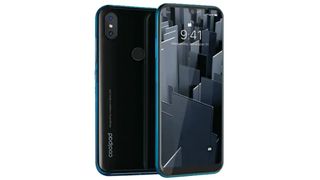 After a long time, Coolpad is ready to try and make a breakthrough in the budget smartphone/tablet market. The company launched the Coolpad Cool 3 today, and the device has been priced at Rs 5999. At this price point, the Cool 3 will be directly in competition with the Redmi 6A.

Its selling point is the dewdrop notch display, a first from Coolpad, as well running Android 9 Pie out of the box. The Cool 3 is the first device in its price segment having these features. It also has a dual colour glossy back finish.

Previous devices from the company have all features the standard 18:9 display, as does the Redmi 6A. However, the Coolpad Cool 3 has a 5.71  HD+ display (1520x720 pixels)  and under the hood is a Unisoc octa-core chipset with support for AI as well as AR/VR, 2GB RAM and 16GB onboard storage.

The Cool 3 has a rear fingerprint sensor as well as Face Unlock technology that functions even in low light. The dual rear camera setup features 8MP and 0.3MP sensors, while the selfie camera in front has a 5MP sensor and a number of beauty levels.

Coolpad’s last release in India was the Mega series in December 2018, which didn't have many takers. The new Cool 3 can be seen as the company's attempt at a resurgence in the Indian market.

The Coolpad Cool 3 will be released in four colours- Midnight Blue, Ruby Black, Ocean Indigo, and Teal Green. The device can be purchased either online or offline at multi-brand retail stores across the country.