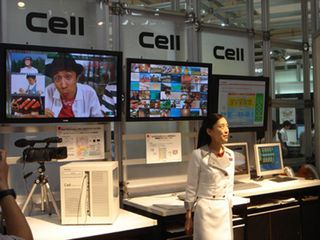 Toshiba was the first to get a SpursEngine product out

At the just-concluded CEATEC show in Japan it was easy to miss some of the smaller products amid the dazzling glare coming off the big boys' stands, such as a new graphics card based on the Cell processor.

Leadtek Japan's WinFast PxVC1100 graphics card showed up this week, packing a SpursEngine chip – that's the Toshiba processor it based on the PS3's Cell CPU.

The ¥30,000 (£160) WinFast is a PCI Express card for desktop PCs and is due out in Japan by the end of October. It's likely to use passive cooling instead of a fan, making it a good bet for small PCs.

As for what it can do, the SpursEngine's power means the Winfast can handle HD video and SD upscaling on its own without putting the strain on the main CPU.