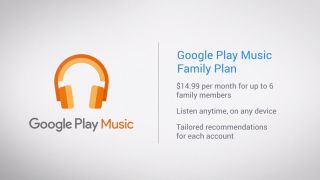 Google's Play Music family plan is finally here, and it's taking on Apple Music in the US by including YouTube Red as part of the subscription.

Google announced the it's Play Music family plan in September, which matches Apple's Music price at $14.99 per month, and includes unlimited, ad-free access to up to six people under the one plan.

According to Google's blog post, Google Play Music includes "unlimited access to more than 35 million songs and the ability for each family member to stream simultaneously on any device."

But the search giant is now sweetening the deal - at least for US users - by including YouTube Red as part of the family plan subscription, which gives you ad-free YouTube access as well.

The Google Play Music family plan will be available "in the coming days" in the US, Canada, UK, Australia, France and Germany, with more countries "coming soon."

You'll need an Android device to get signed up, but you'll be able to access Google Play Music on Android, iOS and the web.