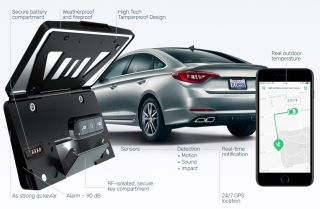 Tired of having your Amazon packages stolen? Sick of seeing them destroyed by rain? How would you feel if you could let Amazon's delivery team inside your house or your car's trunk to deliver your stuff? What could go wrong?

Amazon appears to have some confidence the concept could work, though, as a  report from CNBC claims Jeff Bezos' giant e-commerce company is already at work developing a 'smart doorbell' to facilitate entry into your inner sanctum.

If you're a little put off by the thought of letting someone into your home, you could have the packages delivered to your car's trunk. The report claims Amazon is also currently seeking a partnership with Phrame, which already makes 'smart license plates', which are essentially a remotely opened safe fitted around the license plate on the back of your car.

In this case, the courier would arrive at the car and enter a code into a smartphone, causing the Phrame plate to flip up and grant access to a little pocket where you've stashed your keys. Alternatively, you could activate the plate remotely with your own phone.

Once the package is delivered, the courier puts the keys back in place, closes the license plate, and everyone's happy.

Or, so we hope. Phrame claims it attempts to keep this process safe by allowing only "secured one-time and time-limited access," and presumably Amazon is working under the same principle in the development of its "smart doorbell."

Steal of a deal

None of this is as far-fetched as it may sound. As TechCrunch reported last month, Walmart is already attempting something similar with smart lock company August, which allows employees to deliver packages into customers' homes or even food directly into a freezer.

Perhaps it's worth the risk, if you can bring yourself to trust a courier to walk around inside your home while you're not there.

Following a survey of 1,001 US homeowners from last year, August claimed that as many as 11 million homeowners had packages stolen last year. It also claimed that 69% of American homeowners believed that letting someone into their houses to deliver packages was preferable to leaving the packages outside.  Letting strangers into your house opens up a whole other dimension of concerns, though, ranging from more theft to worries about whether pets will attack the courier.

Smart locks and similar devices are increasing in popularity with every month, and earlier this year we compiled a list of our favorites.