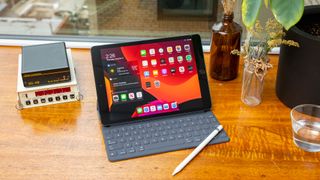 The latest 7th Gen Apple iPad with a 10.2-inch display is now available for purchase in India via Amazon and Flipkart.

Back in September, Apple refreshed its most popular iPad with new internal specifications, including a bigger display, a newer chipset, and Apple Pencil support.

Compared to the previous generation, the 2019 iPad has a slightly larger 10.2-inch display in the same physical footprint, thanks to slimmer bezels. It is a Retina display with a resolution of 2160 x 1620 (4:3 aspect ratio) with a max brightness of 500 nits.

On the inside, the 10.2-inch iPad is powered by the A10 Fusion chipset (same as the iPhone 7) along with the Motion M10 co-processor. Storage options include 32GB and 128GB.

There’s an 8MP f/2.4 primary camera on the back and a 1.2MP selfie camera on the front. For video calls, the 7th-Gen iPad has two mics and a set of stereo speakers. Face ID is not included, and the Touch ID fingerprint scanner handles biometrics.

Most importantly, the new iPad runs on iPadOS, which massively increases the functionality of the tablet by bringing multi-tasking, widgets, Split View, etc. Apple Pencil (1st Gen only) support is also included.