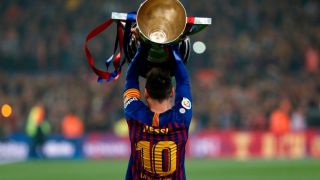 The 2019/20 La Liga season is once again serving up the sort of high-flair, exciting football that we've come to expect from a league that boasts some of the world's most feted players. That's why we're here to help you get a La Liga live stream.

With the likes of Eden Hazard and Joao Felix added into a roster that already includes the likes of Antoine Griezmann and Lionel Messi, this year's Spanish top flight is already proving to be one of the most fiercely competitive seasons in recent years.

Having once again been honoured with the Ballon d'Or, Argentine wizard Messi is once again having a season to savour, with his Barca side odds-on favourites to make it three in a row.

While both Real Madrid and figurehead new signings Hazard and Luka Jovic haven't quite found the sort of form expected of them in the early part of the season, they've managed to still string enough wins together to keep very much in contention of improving on their 33(!) previous titles.

Outside the big two, both Sevilla and Real Sociedad have made strong starts to this campaign, however Diego Simeone's Atletico Madrid appear to be missing goal scoring powers of the departed Griezmann and will need to improve to finish the season within the top three.

It's shaping up to be another stormer of a season in Spain. And to make sure that you don't miss out on any of the biggest games, make sure to read on to discover how to get a La Liga live stream.

Further down this page, you'll discover how to watch La Liga football in the likes of the UK, US, Canada and Australia. It's even free in some places. You can generally tune in on TV or online.

But if you go to watch La Liga online from overseas, you'll quickly discover an obstacle - geo-blocking. That means you won't be able to watch the stream unless either you i) find some dodgy feed from Reddit (which we strongly don't advise), or ii) use a VPN (which we do, and it's really easy as well).

A Virtual Private Network is perfect for this as it allows you to change your IP address so you appear to be in a completely different location (i.e. one that's back in your home country).

And it's ExpressVPN that tops the lot. We can confidentially say that because we've tested so many. It's fast, safe and super easy to download and operate. Plus, it's compatible on laptops, mobiles, tablets, consoles Apple TV, Smart TVs...ths list goes on.

Check out Express VPN and get 3 months free on an annual plan as well as 49% off the usual price. It has some handy other uses, too, like getting around website blocking in certain offices, schools and even countries. And, because of its encrypted tunnels, ExpressVPN will just generally keep you safer and more anonymous online.

How to stream La Liga live in the UK

Spanish footy fans in the UK and Ireland had a bit of a confusing start to the season as there was no confirmed broadcaster of La Liga games in the region when the campaign kicked off.

ITV stepped in for a few weeks, sporadically showing some of the big games and highlights in the opening few weeks of the new season, but now Premier Sports has has been installed as the long-term home of live coverage of the Spanish top flight.

The subscription service signed a three-year deal for exclusive broadcast rights back in September, with ITV continuing to offer highlights free-to-air on ITV4.

Premier Sports is available to Sky TV and Virgin Media customers for £11.99 per month, or a £99 annual charge, and has an online player available for the same monthly charge or for an £89 lump sum. As well as boasting La Liga, the service is also home to live coverage of Serie A and the Dutch Eredivisie.

If you find yourself outside the UK and want to watch one of the televised La Liga games as per above, don't worry about geo-blockers on your account – simply grab a VPN and follow the instructions above to live stream the action.

How to watch La Liga: US live stream

International pay-TV sports specialist BeIN Sport has the rights to broadcast La Liga Spanish football until 2024. It's exclusive, too, so that's the subscription you'll need if you want the legal way to watch La Liga. Subscribing also means you can watch via the BeIN Sports Connect app.

BeIN Sport can be accessed via most cable providers, but can also to TV streaming services such as FuboTV and Sling, They also carry free trials, so worth checking out of you're a cord cutter and proud.

How to live stream La Liga soccer in Canada

Much like South of the border, BeIN Sports is where Barcelona, Real Madrid and the rest of La Liga's teams will be shown in Canada. So that's the BeIN Sports Connect app on mobile.

If you don't want to subscribe to BeIN then FuboTV is the exclusive over-the-top provider carrying the streaming service's La Liga soccer coverage.

Of course, if you are outside Canada, you can follow the VPN route above and tune in with a BeIN or Fubo log-in all the same.

How to live stream La Liga soccer in Australia

If you fancy watching top flight Spanish football Down Under, then you'll need to be a subscriber to beIN Sport who has secured exclusive live coverage rights to La Liga for this season.

How to watch La Liga football in New Zealand

From even a cursory glance at the rest of this article, you can probably guess who's showing La Liga football in New Zealand. That's right...our old friends BeIN Sports.

In New Zealand, it costs from $19.78 per month for access on TV, laptop or mobile.