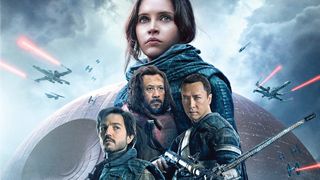 What could be the next Disney Plus Star Wars show after The Mandalorian season 2 starts filming this year, according to star Diego Luna. The show is a spin-off of Rogue One: A Star Wars Story, focusing on Luna's character Cassian Andor before the events of that film.

"Yes, we are doing it. We are doing it this year," the actor told ET, also mentioning that he's read scripts of the show. "It's happening, and I'm getting ready for it."

The exact timeline of the Star Wars Disney Plus TV shows has been unclear, so this could mean we'll see the spin-off in 2021. With filming on the Obi-Wan Disney Plus show reportedly pushed back until early next year, that would appear to make the Rogue One spin-off more likely to release first.

"It is really cool to tell a story where you already know the ending," Luna continued. Anyone who's seen Rogue One knows that every single main character dies by the end, hence why this show has to be set before that movie.

"It is a different approach because of the beauty and it's how things happen. It's not just what happens. It's not the typical way of approaching a story. It's about how things happen, which in fact, is the same that happened in Rogue One," Luna says.

Alan Tudyk will also reprise his role as K2SO, the back-talking reprogrammed Imperial droid from the movie, and arguably its best character.

A long wait ahead

Disney Plus has a busy second half of 2020 to come with WandaVision, Mando, and The Falcon and the Winter Soldier, but these additional Star Wars shows still feel a long way away. The Mandalorian just gives you a real sense of how good Star Wars can be on the small screen, and leaves you wanting more.

What this show will actually be about is still kind of a mystery, but you can assume it'll explore the early days of the Rebellion in some fashion, given that it's all set before A New Hope.

In the meantime, fans can look forward to February 21's premiere of The Clone Wars' final season on the streaming service.