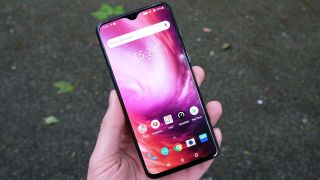 One of the most anticipated phones of 2020 is the OnePlus 8, and it may be introduced alongside a Pro model, and possibly for the first time ever a 'Lite' variant. The mystery of these phones may be over, as a huge spec leak has just given us a good look at the tech inside all three phones.

This leak comes from Chinese social media platform Weibo, where a user posted a full specs list. There's no word on where this information came from, so take it all with a big pinch of salt.

It's worth pointing out that this is a specs list, and there's no word on design, so we don't know if the OnePlus 8 Pro will be like the 7 Pro in sporting a pop-up camera, or if OnePlus takes the phone in another direction.

There do seem to be two front-facing cameras on that device, as we'll get in to, but there have been phones with two snappers in a pop-up so that doesn't suggest anything.

So let's go through the phones one at a time, running through what to expect (if this leak turns out to be accurate, of course).

Let's start with the biggest phone, which is said to have a 6.7-inch Super AMOLED screen with an impressive resolution of 3180 x 1440. Not impressed yet? Well it's also meant to have a refresh rate of 120Hz, topping the 90Hz of the OnePlus 7T Pro.

The camera array seems to consist of only three snappers, so perhaps the device isn't a huge step up from predecessors in this regard. They look to be 60MP, 16MP and 13MP, and presumably the latter two are telephoto and ultra-wide angle sensors.

On the front there's a 32MP camera and also a Time-of-Flight (ToF) sensor, which will likely be used to create accurate background blur in selfies, but we don't know if this is in a pop-up section or a different layout than before.

The battery capacity is apparently 4,500mAh which is a fairly decent size, and around 500mAh more than the 7T Pro. The chipset looks to be a Snapdragon 865, which we expected, but people might be surprised to hear that the phone is supposedly a 5G device. Perhaps that means there's a 5G variant, but it could be the case that there is no 4G version of this phone.

The main flagship device looks to have a slightly smaller screen in that it's 6.44-inches and it's an AMOLED panel. The resolution is said to be 2400 x 1080, with a refresh rate of 90Hz, which is a step down from the Pro but also higher than the 60Hz in most smartphones.

The camera array is nearly identical to the Pro, with 60MP, 16MP and 12MP sensors, and there's also the 32MP camera on the front, but it doesn't look like there's going to be a ToF sensor joining it.

The battery looks set to be 4,000mAh, which isn't that much smaller than the Pro's, and could see this phone last longer thanks to its smaller screen. There's also mention here of the Snapdragon 865 and 5G capabilities, but like with the Pro we can't be sure if that means there's a 5G option, or only a 5G phone.

This is the new entry to the OnePlus range, and it seems to be the company's attempt to keep a finger on the pulse of the mid-range market as its other phones slowly creep towards the top-end.

The OnePlus 8 Lite screen seems to be 6.4 inches, similar to the non-Lite, and it's also an AMOLED panel with a resolution of 2400 x 1080. It could be, then, that the screen here and in the flagship model is exactly the same.

The camera arrays are certainly a downgrade though, consisting of a 48MP main sensor, and also the 16MP and 12MP snappers of the flagship. This means the Lite is missing on the 60MP camera of the other devices, although most people might not mind this step down. On the front there looks to be a 16MP camera.

In terms of battery, it's apparently got a 4,000mAh capacity, just like the flagship, and at this point it looks like the device is very similar, but then we get to chipset. The OnePlus 8 Lite supposedly doesn't have a Snapdragon 865 but a MediaTek 1000 processor.

We haven't tested this on a smartphone yet, but this isn't a flagship chipset so we'd expect the processing power to be weaker than the Snapdragon.

All in all, the steps up between these three phones seem rather minor. We don't expect to hear official word from OnePlus on these devices until after MWC 2020, so there's a bit of a wait until we see the company unveil whatever devices it has for us to see.