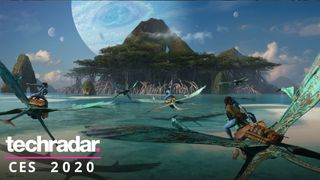 Remember Avatar, the highest-grossing movie of all time until last year, when Avengers: Endgame beat it? Three sequels are now in the works from director James Cameron, and at tech trade show CES 2020, we got our first look at our return to Pandora (you remember, the planet from the movie Avatar?).

We'll see more of the sea life on Pandora in this sequel, which features sequences that are motion-captured underwater. We get a sample of the oceans in these four new pieces of concept art:

In the #Avatar sequels, you won’t just return to Pandora — you’ll explore new parts of the world.Check out these brand new concept art pieces for a sneak peek at what’s to come. pic.twitter.com/bfZPWVa7XZJanuary 7, 2020

Cameron was at CES in Vegas to announce an Avatar-themed partnership with Mercedes-Benz, revealing the futuristic Vision AVTR concept car. Hopefully we get to drive it in a future Gran Turismo game. Take a look below:

As with all concept cars, the Vision AVTR represents a vision of how its manufacturer sees the future of automotive design, rather than something you'll drive to your local supermarket in the near future to pick up potatoes.

Its steering wheel is particularly sci-fi, promising to 'merge' man and machine, with the vehicle recognizing the driver based on their heartbeat and breathing patterns. The look of the car is based on creatures from Avatar's fictional universe. The seats and floor are made from sustainable materials, and the battery is recyclable, too.

It's been a strong CES when it comes to the future of car technology, like the reveal of Sony's Vision-S vehicle, or Continental's in-car entertainment system. But this is the only vehicle that's visually inspired by fictional animals from a sci-fi universe, which gives it a certain distinction.