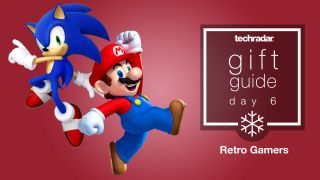 Ready for a bet? We'd wager that, if you received a games consoles as a child, it ranks up there as one of the best Christmas gifts you ever opened. Why not rekindle the memory with one of these top retro gamer gifts?

Whether you cut your teeth in the coin-op arcades, or with a 16-bit console, or are a complete newcomer to the golden age of gaming, there's a wealth of ways to scratch that gaming itch these days.

A whole cottage industry has popped up for people wanting to play old games on their 4K TVs, with mini consoles from Sony, Sega and Nintendo all being released in the past couple of years, pre-loaded with classic games. And it's easier than ever now to get a literal arcade machine for your home.

So, looking for a retro gift for a special someone, or a little treat for yourself? Read on.

Return to where it all began for Nintendo's home consoles

Before Mario was out having his 3D 'odyssey' on the Nintendo Switch, before Link ever picked up an ocarina, the titans of gaming were making their debuts on the 8-bit Nintendo Entertainment System, aka the NES.

A game-changing product, it ushered in a golden-age of pixel-based gaming, with games like Super Mario Bros., The Legend of Zelda and Metroid setting gaming standards and introducing characters that would become staples for decades to come.

The NES Classic Mini shrinks down the console, makes it compatible with HDMI-equipped TVs and comes pre-loaded with 30 classic games and two control pads at a great price. The perfect introduction to old-skool gaming.

As good as 16-bit gaming gets

Now, this is where it gets really good. The Super Nintendo Entertainment System (or the SNES, as it's now more commonly known) was where 16-bit gaming truly came into its own.

With established franchises on its hands, Nintendo started refining series like Mario and Zelda, with the wonderful Super Mario World and A Link to the Past. The NES is  a great time capsule, but the SNES has games that any self-respecting gamer, whatever their age, truly cannot afford to miss.

Like the NES mini, the SNES Classic mini shrinks the console down, fills it with tons of excellent games from the era, and makes it easy to hook up to modern TVs. Just like the NES mini, quality of life improvements like the ability to rewind and save games at any point are also appreciated.

Whether you're an American gamer who remembers it as the Sega Genesis, or a European gamer who fondly recalls playing with a Sega Mega Drive, Sega's 90s era 16-bit console was the company at the height of its powers.

Sonic the Hedgehog. Ecco the Dolphin. Golden Axe. Streets of Rage. Classics of the era, the Genesis / Mega Drive had an edgy, adult-oriented feel that was the perfect counterpoint to Nintendo's family-friendly fare.

The mini Sega consoles are arguably even more refined than those that Nintendo put out, with a generous 42 games included, two controllers and note-perfect emulation, right down to beautiful edge wallpaper designs to flesh out 4:3 games for a 16:9 modern age. Do note however that Sega has licensed a few different versions of these machines over the years, and only the 2019 models have the full feature-set listed here. Double check before making that purchase, even if the older ones are listed at a lower price – they're far inferior.

32-bit games in a pint-sized box

3D gaming, here we come! 1994's PlayStation, Sony's first effort at a home console, ushered in a new era of gaming, with detailed 3D worlds to explore, adult-orientated genres like survival horror cemented, and a marketing blitz that made gaming long into adult life more culturally accepted than ever before. The roots of modern gaming start here.

But, though the era is full of gems, the PlayStation Classic mini console proved to be a bit of a disappointment. A relatively short 20 games list and poor quality emulation undermine an otherwise-wonderfully shrank console design.

And while there are plenty of classic games missing, there are some undeniable gems squeezed in here, with the unmissable Metal Gear Solid, Final Fantasy VII and Tekken 3 taking the limelight. Best of all, the PlayStation Classic's relative unpopularity means its regularly heavily discounted, at which point it becomes a totally justifiable impulse purchase. If the price if right, it's well worth a look.

The king of arcade games, now in the palm of your hand

NEO GEO was the king of the arcade in the 90s, with its cabinets eating coins like the Cookie Monster eats sweet baked treats.

Ahead of the advent of the 32-bit era, its arcade cabinets just couldn't be beaten in terms of detailed, chaotic sprite work. An eventual home console, letting your play the games away from the din of the arcade, was released, but games were priced so extortionately highly that it was relegated to a niche collectors item.

Righting the wrongs of the past, the SNK Neo Geo Mini puts the power of the NEO GEO arcade machines in the palm of your hands. It packs in dozens of games, from Metal Slug to King of Fighters, into a mini arcade machine, complete with dinky buttons, 3.5-inch screen and a waggle-friendly joystick.

Buy the sold-separately control pads and you can even hook the thing up to a TV for two player action. It's one of the pricier retro machines, but it's a lovely item to sit on your desk, ready for a quick stroll down memory lane.