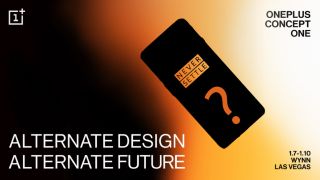 It seems OnePlus has big plans for its smartphones – that's evidenced by the range of great handsets it has put out in 2019, but also by the fact it's got a mysterious concept phone in the works, ready to show off in early January 2020.

That's been confirmed by OnePlus itself, as the company has confirmed it will be hosting its own event at CES 2020, the annual tech show in Las Vegas, in January, where it's set to debut the 'OnePlus Concept One'.

The announcement of this CES event, and the concept phone, tie in with the company celebrating its sixth birthday on December 17.

A concept phone is a handset shown off by a company, but which it doesn't have plans to release on a huge scale, or at all; instead it's used to debut new tech it's working on.

Other examples are Xiaomi's Mi Mix Alpha and TCL's Dragonhinge, while Oppo recently showed off a nameless prototype device too; none of those phones will become widely available, but they show off loads of cool new tech anyway.

What do we know about the OnePlus concept phone?

Unfortunately, we don't know much about the phone, but that's partly the point of it – OnePlus likely hopes to wow us with a boatload of new and unexpected technology. We do know it is a phone, however, as the company explicitly calls it such, so anyone hoping for a smartwatch or new true wireless earbuds will be disappointed.

We can guess at the context of the phone though. As OnePlus itself states in its press release, the name 'Concept One' implies there will be a Concept Two and so forth, suggesting the company has plans for a series of these prototype handsets.

On the 6th anniversary of our founding, our commitment to doing things differently and pushing boundaries is stronger than ever. Come see an alternate vision for the future of smartphones with the unveiling of the OnePlus Concept One at CES. pic.twitter.com/jrX64ant2FDecember 17, 2019

OnePlus describes the phone as 'smoother, faster', which likely refers to a snappy chipset and high refresh rate for the screen, but the company also uses the adjective 'burdenless'. What does this mean?

Of course, this is hugely open to interpretation, but it could point to the device being a foldable. The Motorola Razr is a foldable phone that closes down like a clamshell, and one could call that 'burdenless' as it's smaller and easier to pocket. We'll have to wait to know for certain, but OnePlus also uses the phrase 'alternate design approach', which backs this idea up.

One other piece of evidence, tangential though it may be, is that the launch event is happening in the Wynn Hotel in Las Vegas – probably the most foldable-phone-looking hotel in the city.

We don't know for sure when the OnePlus CES 2020 event is, as the company states the time as 'January 7 to 10 2020, from 10 AM to 5 PM' which is basically the entirety of the run-time of the Las Vegas tech show. It's likely OnePlus will show off the phone at the beginning, and then people at the show can test it over the remaining days.

TechRadar will be on the ground at CES 2020 reporting on all the tech reveals and news, and you can be certain we'll check out the OnePlus Concept One, so stay tuned for everything you need to know.