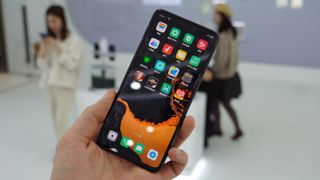 Let’s get this out of the way - this hands-on is with a prototype smartphone; it won't go on sale, you won't be able to buy it and the new and innovative tech in it hasn't been confirmed for future devices. None of that matters though, because this phone is the future.

The nameless device showcased at Oppo's innovation day 2019 alongside an AR headset and some lofty promises for 2020 - new wearables and millions of dollars R&D investment - has no buttons, no ports, no visible speakers and most impressively, an under-display selfie camera.

If you’re not familiar with Oppo, you probably will be soon. The Chinese company has been wildly successful on home turf, and seen wins abroad, dropping one of the first 5G handsets in the UK - the Reno 5G. While it's yet to sell devices in the US, the Oppo brand has been all over TVs across the globe after it snagged the prime sponsorship spot for Wimbledon 2019.

Now, with Huawei in hot water and out of the Western smartphone game, for the time being, Oppo is primed to pounce and is seizing opportunities for headlines with devices like this buttonless, portless, notchless prototype.

That’s why, despite the fact this future-phone looks kind of like a Reno 2, it’s so much more than anything we’ve seen before. It’s a glimpse into what we can expect from phones in 2020 and 2021, and Oppo is one of the few manufacturers bold enough to share its early wares with press.

No physical buttons may sound bonkers, but we've actually seen it before - remember the HTC U12 Plus? That was the first phone to forgo moving, clickable controls on the side of smartphones. Instead, the phone features a raised capacitive, touch-sensitive area that vibrates when pressed.

Why kill buttons? Because moving parts are vulnerabilities - one more thing to go wrong in a smartphone's melange of components.

HTC didn't quite nail the no-buttons thing, but since then, Huawei got some of it right with Huawei Mate 30 Pro. Despite not launching in the UK or US due to political woes, Huawei's new flagship sports a section that can be double tapped and dragged to change the phone's volume. This works well most of the time, and while there’s still a power button on the right side of the phone, is a step towards a button-free smartphone future.

Oppo's buttonless solution is a mash-up of HTC and Huawei's mechanics. There's a raised power button on the right, but to change volumes, you drag across a touch-sensitive area. Perfect? Not quite, but nevertheless, impressively functional, for a prototype.

Apple broke brains when it zapped the headphone jack from the iPhone 7 in 2016, and the missing port is still dividing audiophiles and smartphone users alike almost four years later. That said, it was definitely onto something - just like buttons, ports are weak spots.

Water damage, an overload of pocket lint, worn-out pins; USB ports, like 3.5mm jacks can fail for many reasons, and a broken port means a phone that probably won’t charge.

It's worth noting Oppo is also not the first to go portless. Meizu revealed the Meizu Zero portless smartphone at the start of 2019 - however that phone did have sizable bezels, something Oppo has eradicated with its concept.

Why hasn't it been removed from more phones already? In the past, charging wirelessly has been painfully slow, and transferring large files like videos from phone to phone or phone to a computer has required a cabled connection, so cutting the cord hasn’t been feasible. Luckily, Oppo is taking a two-pronged approach to de-porting with its prototype.

The first prong is speeding up wireless charging, and this prototype powers up with wireless speeds of 30W. Putting it into context, the iPhone 11 ships with a 5W wired charger, while the iPhone 11 Pro’s is a fair bit faster at 18W. Either way, both are slower than this wireless prototype.

Other phones wired charging speeds aren’t far off the 30W wireless speeds of Oppo’s prototype; the OnePlus 7T Pro charges at 30W, the Huawei Mate 30 Pro at 40W and the Note 10 Plus at 45W. In fact, the fastest wired charging phone around is the Oppo Reno Ace which isn’t even launching in the west; this climbs up to 65W charging for a full tank in around 30 minutes.

The other prong is Oppo’s take on AirDrop. We’ve seen Android manufacturers do this with some success - Huawei Share is an excellent example and works across the MateBook laptop line as well as its smartphones. That said, Oppo’s WiFi file sharing is being created as part of a combined effort with Xiaomi, Vivo, and Realme to create a new standard across Android phones - File Transfer.

This won’t be as fast as USB-C, but will enable wireless transfers at around 20Mbps - fast enough for photos and small to medium-sized videos.

Now you see me; the almost invisible selfie camera

Selfie cameras have turned into design problems for smartphone makers. They were fine when 5mm bezels were the norm, squishing in above the display, but since the edge-to-edge craze took hold, phones like the Pixel 3 XL were pretty much ruined from a design point of view by really gross, giant notches.

Workarounds have been hole punches and water droplet notches, sliding components and pop-up cameras, but nothing has solved the problem: how can we make the selfie camera invisible without the need for moving parts?

First up, Oppo has put the camera behind an OLED display. OLEDs don’t light up when displaying blacks, so when the screen in front of the camera isn’t fired up, there’s no interfering light.

Next, the screen pixels covering the camera are physically larger than those of the rest of the display. This extra size lets enough light in for the camera to turn into an image.

If the screen’s black, the selfie camera cutout is totally invisible, and it’s virtually impossible to make out when there’s a dark wallpaper. Fire up some white or light colors, however, and it looks like a slightly color-shifted portion of the display.

We took a selfie using the phone and can confirm, it works just fine, though we weren’t able to take the image off of the phone for closer inspection.

Oppo wasn’t willing to divulge much more when it came to the specifics but did confirm that the screen portion above the camera doesn’t have to be square, it could be a circle to make it even more inconspicuous.

Additionally, while this example is already impressive, the aim is to make it totally invisible and in turn, Oppo doesn’t consider the tech to be ready for market until it is.

Speaking of totally invisible, it’s also worth noting that this nifty prototype also features a Huawei P30 Pro-esque behind-the-screen speaker that uses screen vibration to amplify sound, so you won’t see any visible speaker grilles or holes dotted around the device.

However, we first saw this speaker technology back in February 2018 when we got our hands on the Vivo Apex Concept.

When can we expect it?

As mentioned, this prototype isn’t going to be launched, but its key features will likely be trickled across Oppo devices throughout the next couple of years.

The first will likely be the 30W wireless charging - we’ve seen 27W charging on the Mate 30 Pro, so it’s not too much of a stretch to push that up to 30W in 2020, potentially in-line with Oppo’s MWC 2020 announcement, when it’s expected to be launching the Find X2.

The next most likely thing to feature would be button-free design. That said, ditching buttons seems like a bit of an unnecessary evolution at this stage, to us at least.

The same can be said for removing the USB-C port to make for a totally port-free experience. Necessary or not though, both of these features are clearly oven-ready if this prototype is anything to go by, so are likely deliverable in 2020.

The biggest win for Oppo will be the under-display camera if it’s first to market with one. That said, this also looks set to be the biggest challenge, given the fact that Oppo is intent on making it totally invisible - and it definitely isn’t there yet.

While we’re hoping to get this feature on devices shipping in 2020, therefore, there’s every chance it won’t drop until 2021.

However, the way is already paved for the crystal goblet of smartphone design - a front-to-back, uninterrupted, truly all-screen device with no cameras in sight despite full picture-taking functionality - we live in hope.