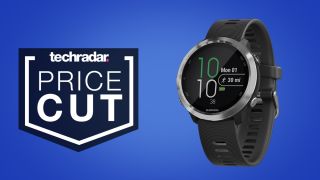 It might have first gone live on Boxing Day, but this deal in the January sales is still one of the best we've seen over the festive period - a Garmin Forerunner 645 with Music for far less than at other sites.

Why? Well, the first clue is in the name: the 'with music' element means you've got offline Spotify on your wrist, so you don't need your phone when exercising - but more importantly, it's just £199 at Argos - and it's still going days after we spotted it, so we're thinking it's not a mistake.

This price drop is so good that we had to check ourselves a couple of time that it was legitimate - however, it's the same as we saw on Black Friday. This is a mid-range watch from Garmin, but started well north of £400 just a year and three quarters ago.

Garmin Forerunner 645 with Music: £199.99 at Argos
We're not sure how an advanced running watch with Spotify on board is able to be offered this cheaply, but here it is - grab this excellent fitness and exercise tracker for a steal.View Deal

For that price, we've had to check it's not a mistake - this is the same watch that's over £400 on Amazon, and around £350 at Wiggle (a retailer known for great prices on sporting equipment).

So for Argos to have it this cheap is perplexing - but we're not complaining. The main issue we had with the Garmin Forerunner 645 was the battery life, as it's surprisingly short for a watch from this brand.

But when running it holds up just fine - it's in the day-to-day use that it's a little shorter, and you're still getting sleep, stress, heart-rate and other monitoring on the wrist, and it's pretty fully-featured when running too.

So if you've got a loved-one after a new watch, steer them this way - it's an even better deal than on the base-level Garmin Forerunner 245, which is surprising.

Not in the UK? These are the best prices for the Forerunner 645 Music in your region: