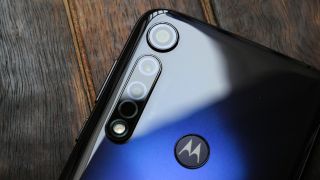 The Moto G8 Plus is a recent handset, having only landed in October, but if you act fast you can already get it at a hefty reduction, as Amazon is currently selling it for just £192 in Cosmic Blue. That’s down from its normal price of £239.99, making for a saving of £47.99 or 20%.

That’s also the lowest price Amazon has ever charged for the Moto G8 Plus, and quite possibly the lowest it has ever been anywhere, at least to buy new.

This is an Amazon Deal of the Day though, so the price is only available until midnight. If you do push the button, Amazon claims it will arrive before Christmas though, so if you’re considering it as a present, there’s still time.

Moto G8 Plus | £192 at Amazon
The Moto G8 Plus is a budget phone with a big screen and lots of cameras, and right now it's even better value than normal, thanks to a big 20% discount. At this price it's a truly top affordable smartphone.View Deal

The Moto G8 Plus has a lot going for it, including a triple-lens rear camera with a 48MP main lens, stereo speakers, and decent battery life from its 4,000mAh unit.

The Moto G8 Plus isn’t perfect – we noted in our review that performance is average, and that despite having three rear lenses it can’t take wide-angle pictures, as although it has an ultra-wide lens, this is reserved for video. Still, at under £200 these are small complaints against what’s otherwise a highly capable smartphone.