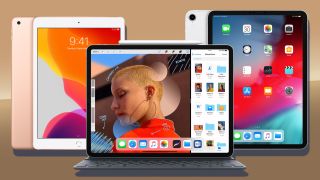 Tablets were always going to come in useful for the elderly population; from their large high-resolution displays and buttons, to their grippable form factors, they are only slightly less portable than smartphones yet offer a world more functionality at a tap.

It can be hard to know what tablet to buy a senior, especially if they have not used one before. While it may be tempting to think that Apple offers the most intuitive tablet operating system out of today's vendors, Android has made great strides in simplifying the user experience - and there is a far greater number of devices running Google’s ubiquitous OS.

Which ever make of tablet you are looking to purchase either for yourself or for an elderly relative, you can't go wrong with our top picks for seniors below.

Best tablets for seniors - at a glance

The high end tablet for seniors

Apple devices are often criticized for their simplicity, and this is exactly why they make such good devices for seniors. Apple's iPad Pro 9.7 is the company's best tablet for seniors thanks to its crisp display that balances size and portability.

It also has True Tone Technology that adapts to your environment by adjusting the white balance, which makes images pop and text easier to read when combined with its high brightness.

It's Apple’s most affordable tablet that can be used with an Apple Pencil and official keyboard cover, which makes it a great option if you want to type out the occasional email or converse on messenger without having to awkwardly tap on the iPad’s glass display.

The best budget tablet for seniors

The Kindle Fire HD remains Amazon’s most affordable tablet, making it a suitable option for seniors on a budget. There are two main versions, the Fire HD 8 and the Fire HD 10 which have 8 inch and 10 inch screens respectively, both offering a full HD resolution. Although far from the sharpest screen on the market but still renders websites and text crisp enough to make for easy reading. The Fire HD 8 is also especially portable and good for reading Kindle ebooks on.

The Fire HD comes with Alexa, Amazon’s inbuilt personal assistant, which will useful for seniors who don’t want to reach out to tap the screen all too often; it can be used to do anything from searching the Internet to opening apps, get a weather forecast, or pause movies while they are being watched. Apple’s Siri is just as capable, but it’s not available at this price point.

Tablet with a familiar desktop experience for seniors

The Surface Go is Microsoft’s affordable Surface tablet, and it’s a great option for seniors who are looking for more of a desktop computer experience but don't want to spend a great deal of money. It comes running the full version of Windows 10, allowing users to install a vast range of applications, and its screen can be doodled on using Microsoft’s magnetic Surface Pen.

This convertible tablet has a fantastic display that won't cause problems for ageing eyes, and it’s complemented by superb speakers that make watching videos and using the tablet’s built-in webcam a pleasure. That webcam lets users log into Windows using Windows Hello facial recognition, which is a huge plus for seniors that don’t want to repeatedly type in passwords.

From its surprisingly good camera to its solid build quality and powerful processor, Samsung’s Galaxy Tab A is a great budget option for seniors who want a smaller Android-powered tablet. It also runs Android 9 Pie meaning users will get the latest updates for at least another year.

The tablet arrived as a competitor to the iPad mini in early 2019, and while it can’t compete on many fronts it does offer an attractive 1,920 x 1,200 pixel-resolution display while toting support for Samsung’s S-Pen, which lends it similar drawing and note-taking capabilities to what we have seen in the company’s range of Note smartphones.

The portable iPad for seniors

For the elder that is looking for the most capable pocketable tablet, the iPad mini is hard to beat. Its diminutive size makes it the best option for portability, but it's far from the cheapest tablet in Apple’s range – even costing more than Apple's 9.7-.inch version.

And clearly its smaller 7.9-inch display size is less suitable for magnifying text and other screen elements to make them more readable. Still, there are a few things that this small-yet-mighty iPad can't do thanks to its impressive list of specs that lie under the hood. Its battery life is impressive too and will run for up to 10 hours depending on the task.

The Samsung Galaxy Tab S6 has a beautiful Super AMOLED widescreen display that seniors (and anybody else) would appreciate. Going up against Apple’s iPad Pro range, it retails for slightly less money but comes with Samsung’s S Pen stylus that slots into a magnetized area just below the main camera for safekeeping and recharges its battery there after 90 minutes.

Both the Galaxy Tab S6 and Apple’s iPad Pro can be used like laptops when twinned with keyboard cover attachments that have to be purchased separately. When it comes to comfort the Tab S6 easily feels like the more svelte device out of the two thanks to its softer edges, thinner body (of 0.2mm, mind) and significantly lighter frame (420g vs 468g). Just be aware that, like any modern iPad, it has no headphone jack - so wired headphones are out of the question.

The lightweight tablet for seniors

The Asus ZenPad 3S 10 is a great option for seniors to consume media on thanks to its brilliant 2K-resolution display, hi-res audio support and fast chipset. It combines the design of an iPad with the flexibility of Android – and crucially it comes with expandable storage, which you will probably never see in one of Apple’s tablets.

Unlike more modern tablets, and the ZenPad S3 10 has a headphone jack while also featuring a USB Type-C port, lending it compatibility with the increasing number of useful adapters and power supplies on the market.  It’s also incredibly lightweight, tipping the scales at around 430g.

On paper, the Huawei MediaPad T3’s 10-inch display doesn't have anything special about it. It has a HD resolution, which is low compared to competing tablets. However, its IPS panel (which lends it decent viewing angles) and blue-light filter (which reduces tiredness on the eyes) makes it an intriguing option for seniors who value comfort.

It’s constructed from a solid piece of sleek anodised aluminium, which makes it easy to grip in the hand. You won't want to use this tablet for much more than basic tasks due to its meagre specs under the hood, but for general entertainment and streaming video, it’s a cheap and cheerful option.

Premium Windows experience in a tablet for seniors

The Surface Pro 6 is the perfect pick for the senior that wants a tablet that converts to offer a convincing Windows 10-powered laptop experience. Microsoft’s premium hybrid tablet sports an attractive 12.3-inch 2,736 x 1,824 PixelSense display which is as good as (or betters) those found on many of its rivals.

It’s plenty portable too despite its powerful specs inside, weighing just 1.7 pounds and measuring 0.33 thick. While the Surface Go’s far more sensible price tag will make it the better option for many seniors, the Surface Pro 6 is by far the best option if users want both power and portability in a smart package.

The no frills tablet for seniors

The no-frills Dragon Touch is designed to be a budget tablet for school use. However, its affordable price tag and surprisingly decent specs (for its cost) make it an intriguing option for seniors on a budget who seek a highly portable slate.

This 7-inch Android tablet has access to the Google Play store, opening up all manner of possibilities which are expanded by the Dragon Touch’s microSD card slot that allows storage to be bumped up to 128GB. Be aware that it doesn’t have Bluetooth or GPS built-in, however, so it’s more suited to use around the home than outside.