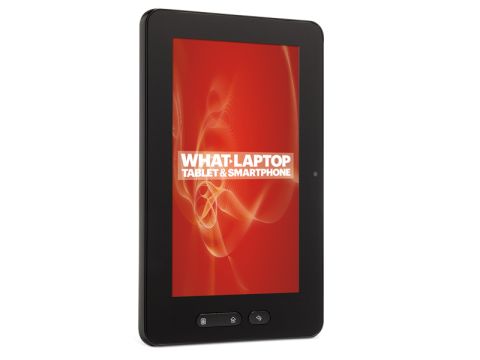 A budget tablet in many respects

An Android tablet that's designed to be affordable, such as the Tablo (available for £99) won't be as polished as the Asus Eee Pad Transformer Prime, for example, or have a display as vibrant as the iPad 2's.

But low-priced tablets are still worth a look. After all, if all you want a tablet for is to send an occasional tweet from the sofa, read email, or quickly look up a film on IMDb, it may be more sensible to choose a device such as this that won't break the bank.

The Tablo has an unlock screen that looks very similar to the one in Honeycomb, Google's version of Android that is built specifically for tablets.

But the device is actually running Android 2.3, which is for phones. This is typical of most similarly priced 7-inch tablets, but we look forward to the day when even the low-end Android devices come with the very latest Android version, Ice Cream Sandwich.

Although the Tablo's hardware is nothing fancy, it runs surprisingly well. It has a capacitive touchscreen display, so prodding at the screen nearly always selects whatever is under your finger.

The ARM Cortex A8 1GHz processor isn't especially powerful, but it can run most of the popular apps without a hitch. Facebook, Twitter and Angry Birds ran perfectly, albeit with slightly longer loading times and an occasional moment of lag.

Maps and web browsing were a similar story - a slightly slower experience than we're used to, but still perfectly usable. YouTube video was more problematic. Although video played fine, it took 20-30 seconds before a clip would load, a wait that made the experience frustrating.

The battery isn't removable, and the buttons make a noisy click when pressed, which quickly becomes annoying. The bezel surrounding the screen is quite large, the colours are slightly washed out and the viewing angle is poor. All of this is forgiveable though, since the price is a third of the iPad 2's.

We were considering recommending the Tablo, since its reasonable performance and great price make it a tempting prospect. That is, until it began behaving oddly when we connected the battery charger.

Applications crashed, the notification bar slid down of its own accord, and the screen registered input when we weren't touching it. The problem went away after a restart, but resurfaced during later testing.

Although it only happened occasionally, unlike some of the other issues, this is something we really can't overlook, and is a nasty reminder of the Tablo's low-cost build.

There's a lot to like about the Tablo, but considering it's more expensive than other budget models, our advice is to shop around for a deal on a better affordable tablet.

You may have to spend slightly more, but the Blackberry PlayBook, Samsung Galaxy Tab or HTC Flyer are all superior.