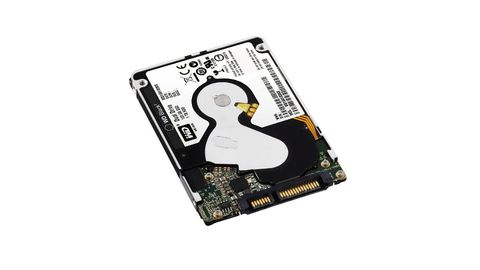 A great way to gain more granular control of your storage needs, but it's marred by its high price.

We've seen hybrid drives before - the Fusion Drive in Apple's iMac, for example. Typical hybrid drives utilise a small cache of fast flash memory to store regularly accessed data and provide a timely speed boost. But what we have here is a bit different.

The WD Black² is a dual drive, or two drives in one chassis. The solid state and traditional magnetic portion are two completely separate volumes, so never do the twain actually meet in data terms.

On paper, such a set-up comes with plenty of pros and cons. In theory, hybrid drives combine the best of both worlds. In practice, the learning curve of hybrids can cause inconsistencies. WD's alternative approach means the zippy solid-state performance is limited to the SSD part of the drive, however you are guaranteed to get that performance whenever you call upon it.

You could, of course, buy two separate drives. For a desktop, that's probably the way forward. But for a laptop with a single drive bay, this dual-drive makes a much better case for itself. You pays your money, you takes your choice. But what should that choice be?

Let's start by dealing with some numbers. We're talking 120GB for the solid-state part of the WD Black² and 1TB for the magnetic hard drive. Impressively, both drives are squeezed into a chassis that's identical in size to any standard 2.5-inch laptop drive.

As soon as you start digging down into the detailed specs, you are for the most part dealing with two separate drives. The solid-state part of the package is a little tricky to pin down, as WD isn't hugely forthcoming.

Our best data is that it's based on the JMicron's JMF667H controller with 20-nm MLC NAND. That's a quad-channel controller and so half as wide as most SSD controllers we're used to seeing. Official read and write performance is pegged at 350MB/s and 140MB/s, and looks a little off the pace compared to even budget-priced, standalone SSDs. The magnetic 1TB drive is a 5,400rpm effort. So even by conventional magnetic drive standards, don't expect fireworks.

The whole shebang is hooked up to a 6Gbps SATA controller and you also get a little SATA-to-USB adapter enabling you to use the drive (or any other 2.5-inch drive for that matter) as an external USB storage device. Nice.

Unlike most hard drives, the setup part of the WD Black² experience is worth a quick chat. When you first install the drive, all you'll see is the 120GB SSD. The 1TB magnetic drive is invisible.

But don't worry. The procedure goes like this. First, install Windows on the SSD as you would normally do on a conventional drive. Once you're up and running, you then plug in the WD USB key which contains a script that takes you directly to the relevant download page for the WD Black² drivers. It's actually not totally clear which file you need to download of the two on offer, but once you've worked that out, you install the software and – ping – the 1TB drive appears.

It's also a little odd that the software isn't actually on that USB key and that it merely directs you to a download. Even in this age of ubiquitous connectivity, not needing an internet connection can sometimes come in handy. That's especially true in the early stages of building and installing a new PC.

And that, really, is that. It's a very straightforward and painless process. It just leaves the matter of how the WD Black² actually performs, which is of course a tale of two halves. The SSD part of the package notches up a somewhat mixed bag of metrics.

It's not going to win any awards for sequential throughput. 432MB/s and 138MB/s for incompressible reads and writes respectively are nothing special, albeit higher than WD's claims. That said, there's no real fall-off for incompressible versus compressible, which is nice to see.

More to the point, it puts out some pretty nice numbers in the 4k random access tests. 24MB/s and 80MB/s are none too shabby at all. The main point to take home is that the SSD part of the WD Black² is the real deal. It's not compromised by the inclusion of a magnetic drive in the same package.

Speaking of the magnetic drive, it's as good as 5,400rpm laptop drives tend to be. So the sequential numbers are okay at a little more than 100MB/s for both reads and writes. But the random access performance is below 1MB/s and thus a bit crappy. In theory, that's fine - the magnetic portion is really only there to provide mass storage. So, if the price is right, the proposition still makes sense. Hold that thought for a moment.

Innovation is hard to come by in terms of mass data storage. Mechanical platter drives dominated the computer industry for decades thanks largely to standardised manufacturing processes. Drive makers would tinker with the technology - a few added RPMs here, an extra 1MB cache there - but at the centre of it all the same tired old magnetic disc remained. Solid-state storage is changing all that, of course, but it's reassuring to see WD actively pushing the relatively new hybrid drive concept in new directions in an effort to maximise access speeds. But are its efforts ready to pay off?

There's no question we like the concept of a 2.5-inch drive that combines the capacity of a magnetic drive with the performance pizazz of an SSD. On paper, it's the perfect combo. We probably also prefer this approach to typical hybrid drives, which can deliver patchy performance.

The performance of an SSD is also more than acceptable. If you're running a magnetic drive in your laptop, you'll be stunned by the difference an SSD will make.

In really practical terms, then, you have to decide whether 120GB of solid-state storage gets the job done for you. If, say, you have a big games library, it's almost definitely not going to be enough. For everyone else, it makes for a decent boot and application drive.

For laptops, the proposition is a bit more finely balanced. If you only have one drive bay, matching the 1.1TB capacity is going to be brutally expensive if you go for an SSD. However, for a little less than the price of the WD Black² you could have, say, a 480GB Crucial M500 SSD.

A 500GB Samsung 840 Evo, likewise, is only a little more cash. What's more, you always have the option of expanding storage externally via USB. So our money would go on the biggest possible pure SSD.

It's a pity because the combination of SSD and magnetic drive in a non-hybrid package is a very compelling proposition and no mean feat of engineering. Unfortunately for WD, it also has to add up as a value proposition and at this price point, it's not quite there.