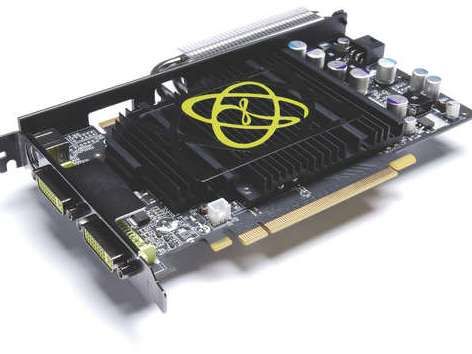 Expect a puzzled look from your accountant if you buy

We were never fooled. In fact we rarely are when it comes to matters of product names. You see despite the numerical similarity between this and the 7950GX2, this is actually a much meeker prospect. Curse the barefaced cheek of graphics card naming conventions, eh?

Still, we thought we'd give this a fair run at our benchmarking gauntlet.

Firing up benchmarking stalwart 3DMark06 demonstrated fairly quickly that, while we weren't in the presence of greatness, XFX's remix of the 7900 can just about handle itself in a polygon chucking tussle.

The main problem with this situation is that, currently, the X1900XT is cheaper than this card. While some would argue that the difference in both scores and price is marginal, it's hard to recommend 'less is more' as an intelligent buying ethic.

There are certain benefits to having a completely silent card, though, after all this would add some real cojones to a media centre, if you can find a case it will fit into. We're quite prepared to believe that some serious design-based witchcraft went into making this thing run at an acceptable temperature with nothing but a decorative metal head dress.

The fact of the matter is, we know that, despite the cheeky extra 50 in the name, this isn't the horsepower shunt the G73 core truly deserves.

After all, we've previously played with eVGA's spicy £272 Signature 7900GT, which was overclocked up to its armpits and capable of garnering 5,865 notches in 3DMark.

Given £300 cold hard cash, though, we'd grab an X1900XT and spend the change on clothes, food and romancing a lady. Mike Channell