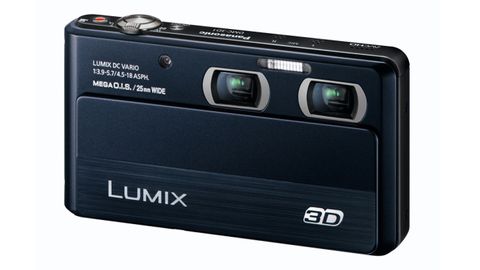 If you like the look of images produced by Lumix cameras, you're not going to be disappointed by the Panasonic Lumix 3D1. Colours are strong, skin tones look natural and detail, at lower ISO settings at least, is impressive.

At ISO 400, textures start to become a little coarse. There's a slight colour shift at 1600, and at ISO 3200, detail and edges becomes choppy enough to keep this setting for emergencies only.

At the widest focal length, the lenses show distortion, and there's no need for a bench test to realise that the edges of the frame - particularly the corners - don't come close to the centre for sharpness. Zoom in a little and this is no longer a serious issue.

The Panasonic Lumix 3D1's video performance is good, too. A one-touch record button triggers shooting in around two seconds (it takes slightly longer when capturing 3D footage), and the results appear bright and smooth during playback.

Predictably, the small stereo microphones mounted in the top-plate pick up more sounds near the camera than you'd probably like, but the Panasonic Lumix 3D1 isn't alone in this respect.

In terms of capturing 3D images, you need to develop a slightly different way of shooting than with 2D photography. To maximise the sense of depth, you need to look for layers within the scene you're photographing.

The relatively narrow separation of the Panasonic 3D1's lenses means that you have to work slightly harder in this respect, to avoid pictures lacking punch. However, images look well aligned, and the effect is convincing.

The biggest issue with the camera's performance is the poor battery life. It's no surprise that the Panasonic 3D1 falls short in this regard when you consider the extra power demands of two zoom lenses, two sensors and a massive touchscreen. But that doesn't make it any less frustrating.

Using the same BCG10E battery pack as in the likes of the Panasonic TZ10, the lifespan is quoted at 200 images on a full charge. However, it fell far short of this during our test. Even leaving the camera sitting idle with just the screen on sees the battery symbol flashing comparatively quickly.