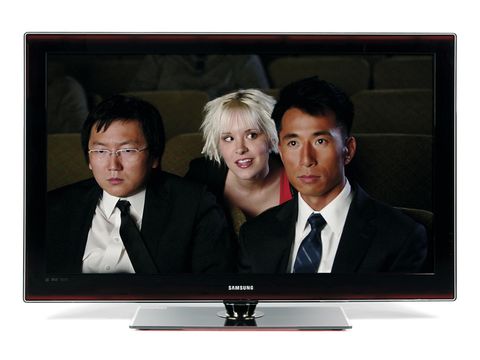 Chief among the Samsung PS50A756's attractions is its black level response

But will it prove a case of features taking priority over picture quality?

That lovely chassis, with its striking 'touch of red' utilises an innovative construction technique that dispenses with both rivets and glue.

The set's connections really indicate what makes this plasma special, though. For alongside a very handy four v1.3 HDMIs can be found two significant multimedia options: a USB 2.0 port and a DLNA-certified ethernet jack that allows you to stream in similar ﬁle types from a connected PC.

What makes the latter two ports really special, though, is that they deliver the PS50A756's internet connection.

You can either hardwire the TV to your broadband connection or router via the ethernet jack, or connect it wirelessly via an optional 'LinkStick' dongle inserted into the USB port.

This does not mean the TV can just surf the internet, though. Instead it hooks up to a dedicated server set up via Yahoo, from where it can retrieve news, weather and ﬁnancial stock reports, specially formatted to suit the TV screen.

The service is interactive enough to enable you to ﬁnd your local weather report, or have the TV show just your favourite stocks, although Samsung could do with upping the internet content level of its service sooner rather than later. But you still get a childish thrill from the simple fact that your TV is ﬁnally talking to the worldwide web without a PC.

Also breaking new ground on the PS50A756 is the Content Library: a stash of built-in memory storing such stuff as photographs you can use as screensavers; recipes; illustrated and narrated children's
stories; children's songs; exercise routines and even a selection of (very basic) games.

While this all feels rather like a trial run in terms of its content level, it does enough to make us feel satisfied that we've seen a glimpse of the future.

Elsewhere, the PS50A756 benefits from a healthy stack of image processing systems, including 100Hz, and Samsung's Movie Plus system which interpolates extra frames of image data to make motion more ﬂuid. And ﬁnally, the screen sports a full HD resolution and a huge claimed contrast ratio of one million to one.

Day to day use of the PS50A756 is impressively straightforward, however, we'd knock a couple of marks off solely because of the set's wireless connectivity.

As with so many things wireless, we had a nightmare getting the Wi-Fi dongle to talk properly to our router.

It took a good couple of hours, and in the end rather irritatingly required us to turn off our router's PING blocking, which left us without a potentially important security measure.

Chief among the Samsung PS50A756's attractions is its black level response. It produces dark scenes with a naturalism and black level depth that's truly outstanding, thrashing anything a normal (ie, non LED) LCD TV can do and even rivalling Panasonic's plasmas.

This unexpected, but very welcome strength also plays a big part in helping the PS50A756's colours shine. Tones look both vibrant and natural, and they're given added realism by the way the TV's processing and full HD pixel density help the screen produce even the subtlest colour blends without any striping effects.

The 1080p resolution also plays a large part in the screen's outstanding crispness and detailing when showing HD sources, with additional support coming from the TV's blur-free motion handling.

The only serious negatives we can report are that the TV's picture processing isn't always helpful. For instance, the optional Edge Enhancement feature can over stress object edges, and you shouldn't set the Movie Plus system higher than its 'low' level if you want to avoid glitching during pans.

But provided you're careful with these features, the only other gripe we can ﬁnd is that, occasionally, skin tones can look a bit orange.

The PS50A756's 'invisible' speakers lack clarity, sound short of treble detail, and even occasionally make dialogue sound slightly dislocated from the image. The good news is that they can go reasonably loud, and even deliver a bit of bass.

With 50in plasma TVs now available for under a grand, the Samsung PS50A756's £1,700 price tag clearly isn't cheap. But then it does carry various unique features and its performance is magnificent.