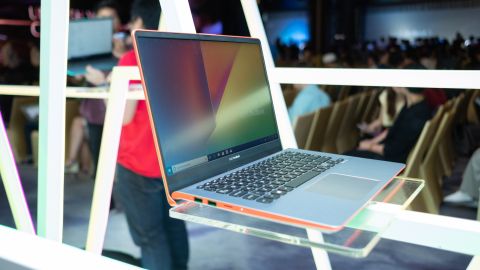 The Asus VivoBook S certainly stands out as an attractive and colorful-looking laptop that’s perfect for college students and those with a disdain for gray.

Asus has a lot on show at Computex 2018, and two of the most interesting things to roll out were the VivoBook S15 and VivoBook S14. These new laptops sport a more casual and colorful attitude that much of the competition, and Asus says they’re “designed for the young and the young at heart”.

The eye-catching colors are the first thing you’ll notice about the VivoBook S. You can choose from Firmament Green, Star Grey, Silver Blue, Gun Metal, and Icicle Gold. The Firmament Green version is the only model that features its color throughout – the other models simply feature a colored trim on the sides, with an all-grey finish elsewhere.

This model also features a textured woven finish surrounding the keyboard, while the Icicle Gold model sports a brushed finish with diamond-inspired motifs for that slightly edgier look.

Asus is touting its new ErgoLift hinge on several of its new models, and the VivoBook is no exception. The new hinge essentially lifts the base of the laptop upwards when you open it, thus tilting the keyboard by 3.5 degrees to make for a more comfortable typing experience.

Both models feature significantly thinner bezels at the top and sides, giving a much more immersive experience when you're staring at the screen all day. Weight-wise the 15.6-inch S15 weighs only 3.96lb (1.8kg), while the 14-inch S14 has an overall weight of 3.08lb (1.4kg). They’re slim enough to slip into a standard laptop or messenger bag as well, measuring just 0.71 inches (18mm) at their thinnest point.

Connectivity-wise there’s a satisfactory number of ports available, including USB 3.1 Type-C, three USB Type-A, full-size HDMI, and a microSD card reader. We would have liked a standard SD card reader instead, as well as an Ethernet port.

A full-size keyboard makes for comfortable typing, and the keys travel far enough to register a satisfying click with each stroke. The ErgoLift hinge really does make a difference when you're typing, although if you’re using the VivoBook on your lap you might not notice much difference.

The touchpad is spacious and responsive as well, with a small fingerprint sensor at the top-right for easier logins via Windows Hello.

The VivoBook S may seem like a playful little number, but its specs tell a different story. Both models can be configured with up to 8th-generation Intel Core i7 processors, along with 16GB RAM and NVIDIA GeForce MX150 discrete graphics.

In terms of storage, the S15 has a dual-storage design that allows for up to a 512GB SSD and a 2TB HDD to be used for maximum performance.

The VivoBook S certainly aims to be a playful and lightweight laptop that offers decent performance in an attractive form factor. It also has an attractive price that would make it a great choice for students who want something that looks good but can keep up with fairly demanding tasks.