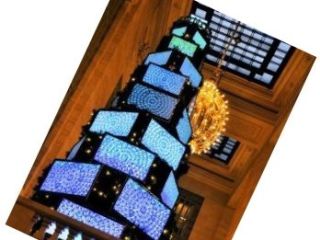 It seems Aquos LCDs do grow on trees…

Commuters in New York's Grand Central Station received a shock yesterday when they were greeted by a 26-foot tall Christmas tree… made of 43 Aquos LCD televisions.

Surprised passengers stood back and admired the unusual decoration, which has been donated by Sharp. Passers by can sign up to win one of the panels, or simply watch the coordinated video animations (including a waterfall that splashes down from screen to screen) created by Japanese artist Tsuyoshi Takashiro.

Admittedly not as 'green' as a real tree, Sharp's 26-foot stunner does, er, have its roots firmly planted in the spirit of Christmas, with the company using the display to publicise non-profit charity, the Hope Program.

In other strange news from the last seven days, following on from the loss of a bag full of tools in space earlier this week are reports that astronauts on the International Space Station have mislaid yet another item: this time, a spider.

One of two placed aboard the shuttle Endeavour for experimental purposes, the female spider appears to have escaped during transit.

"So confused" is the second spider by the "zero-gravity conditions" that it has filled its tank with a web in an effort to stop floating around, the Metro reports, thus thwarting astronauts from confirming whether the unaccounted arachnid remains hidden inside too.

What about this for parental control?

Aside from reminding us oddly of something Hannibal Lecter might wear, this delightful contraption boasts the additional advantage of aiding your offspring in counting how many bites they've taken (and may even encourage some of that lovely silence).

It even plays a jingle every 1,000 chews to mark the occasion.

In terms of gadgets, we've seen it all this week, from the purposeful: The Houdini and Houdini Pro Automotive Escape and Rescue tools – two emergency car aids (not unlike seatbelt cutters or window smashers, but with the bonus of an extra safety whistle and LED light) for escaping "from a wrecked vehicle, or one submerged in water"…

Police at the Orange County Sheriff's Office are trying to explain why one of its deputies walked off with a detainee's Xbox after pulling him over for speeding. Then, there's the man who has invented a vibrating toilet seat, and genius-invention-of-the-week goes to the Scotsman Trufil beer dispenser – ten pints in ten seconds…wow.

An escaped cockatiel has been reunited with its owner after screeching his name down the phone to confirm his identity. Sue Hill found the fugitive in a Welsh park and called the RSPCA, which confirmed a missing parrot had been reported missing.

Upon phoning the owners, she passed the handset to the bird. "As soon as he heard Mrs Edward's voice, he stopped chirping and began saying 'Smokey,' [its name]," Hill told journalists. The Edwards said they were over the moon to have their pet back.