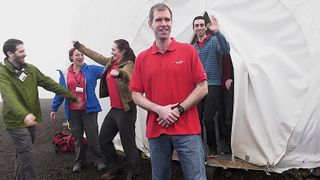 On the northern slopes of Mauna Loa, one of the largest volcanoes on Earth, six scientists have just completed one of the longest experiments yet into what might happen when humans go to Mars.

The six - a French astro-biologist, a German physicist and four Americans: a pilot, an architect, a journalist and a soil scientist - were asked to live in an airtight dome for twelve months, and conduct research while trying to avoid personal conflicts.

On Sunday, the group emerged after completing their year-long experiment, which was titled HI-SEAS. They had survived with extremely limited resources and communication with the outside world. Fresh food wasn't allowed inside the dome, and there was almost no privacy.

Christiane Heinicke, the German physicist, said the scientists were able to collect water from the Mauna Loa soil, which is similar to Martian soil. "You can actually get water from the ground that is seemingly dry," she said. "It would work on Mars and the implication is that you would be able to get water on Mars from this little greenhouse construct."

Tristan Bassingthwaighte served as the crew's architect. "The research going on up here is just super vital when it comes to picking crews, figuring out how people are going to actually work on different kinds of missions, and sort of the human factors element of space travel, colonization, whatever it is you are actually looking at," he said.

On emerging, the group gorged themselves on fresh bananas and pizza while hosting a press conference. They said they were looking forward to swimming in the ocean. But they also said that the simulation showed that a Mars mission has every chance of success.

"I can give you my personal impression which is that a mission to Mars in the close future is realistic," said Cyprien Verseux, the astrobiologist. "I think the technological and psychological obstacles can be overcome."

Two more HI-SEAS missions will follow - each eight months long, starting in January 2017 and January 2018. If you'd like to apply, there's an application form here - the deadline is 5 September 2016.