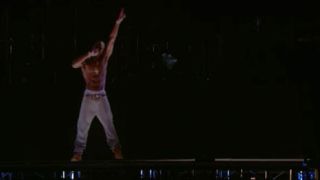 1996 called, wants its rapper back

You might think today's One More Thing is for real, but it's actually just a hologram.

And you might think it's just made of words and pictures, but if you scroll down, there are sound effects. And there's an exclusive first look at the next Google Doodle that was in no way created by us in Paint. We spoil you, we really do.

What up Snoop? - If you haven't seen the incredibrill (that's the official rapper term) video of famously dead Tupac performing as a hologram at this year's Coachella festival, you're missing out. Rectify. [Duck and Roll]

Sound effect - Books, man. They've got a lot of words in. Tedious words, describing things and explaining what's going on. You know what books need? Sound. Yes, that won't devalue the writing at all. Thank goodness for Booktrack, which is for some reason building a business on adding sound effects to ebooks. Later, maybe they'll add images that move. [The Guardian]

Yankee Doodle - Sure we have snazzy job titles like "writer" and "editor" and "dogsbody" but even we dream of the day we can change our email signatures to "Kate Solomon, Doodler", even if the word does technically mean fool or simpleton. You can apply for this role as Google Doodler too if you like, but we've got to warn you, our application is pretty strong: [Google]

Historical rewrite - Remember when it turned out that Yahoo actually invented Facebook? Now it emerges that Microsoft invented the iPhone, but was just too tight and too scared to see it through, at least according to Nathan Myhrvold, previous Microsoft CTO turned cookbook writer. [Men's Journal]

Mother's pride – To show off their mad acceleration skills, two Smart ForTwo electric cars have been hooked up as Pong controllers. We're going to go out on a limb and say the original arcade controllers were a bit better for the purpose. [Simply Zesty]

Gee, mail – Google has finally coughed up the cash to buy the gmail.de domain and g-mail trademark in Germany instead of slogging it out in court any longer. So long, Googlemail! [Slashgear]

Game on – Like rains to the drought-ridden desert, EA titles have returned to Game. You can now buy big hitters like Mass Effect 3 and FIFA Street from Game.co.uk if you haven't already picked them up elsewhere. [CVG]

Spinning schminning - Working on the sound principle that exercising is boring and racing against plumbers is brilliant, one Canadian modder has plugged his exercise bike into Mario Kart with sensors detecting peddling speed and buttons on the handle bars. Warning: it is "a fair bit harder than it looks". Yeah, but you'll be fit as a fiddle in no time. [Kotaku]

Robocop. Literally. – In South Korea, Robo Prison Guard patrols the halls of the slammer with 3D camera and sensors galore to keep tabs on the jailbirds. How long before some modding genius is incarcerated, hacks the 'bot and leads his fellow inmates into some kind of Lord of the Flies scenario? We're already working on the screenplay. [Reuters]

Case dismissed - If you're at all concerned that you may get shot through the head while talking on your iPhone, you may want to invest in this Y52,500 ($648 or £412) case that can probably stop a 50-calibre bullet. Maybe. Actually, it isn't at all clear about whether it can or not. Best not to rely on it in life or death situations – perhaps just fake your own death and move abroad instead. [Kotaku]