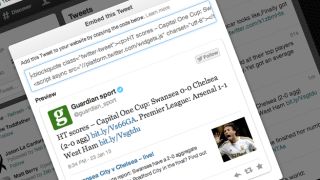 More sponsored tweets on the way?

Twitter has hired a former Google executive to head up its film and TV expansion project in an effort to increase ad revenue.

Jennifer Prince, formerly head of Google's media and entertainment as sales, will be heading up the new department at Twitter. She said that she will be hiring a new sales team to hammer out deals with producers and broadcasters in an attempt to show how Twitter can generate debate around a programme.

Twitter wants to become a "social soundtrack" for TV and film whilst also increasing and improving adverts that are relevant to what you're watching.

The social network has already announced a partnership with TV ratings company, Nielsen, to measure the reach of programming across social networks and it's had several partners sign up to its targeted advertising platform, Amplify.

Prince begins her new role today and, according to her, is planning to hold partnership talks with brands in the coming fortnight.