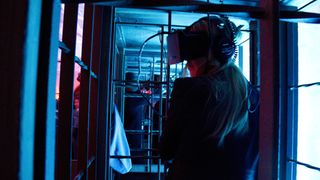 Are you ready for the future of entertainment?

The virtual reality business no longer rests entirely on Oculus Rift's shoulders, as the company that kickstarted the craze is being gobbled up by Facebook and competitors are springing up like weeds.

But virtual reality is still the future of entertainment, according to someone who should know: Mike Woods, creative director at Framestore, the visual effects company that recently won an Oscar for Gravity.

"I don't see VR going anywhere. I don't see it being a fad or just a Zeitgeist thing. This is pure immersion," Woods told TechRadar at the Game of Thrones season 4 premiere in New York, where Framestore was showing off a brand new VR experience. "You can get lost in semantics, but ultimately you're putting people in a TV show."

In addition to Gravity, UK-based Framestore's credits include films like Avatar, RoboCop, The Dark Knight, Harry Potter and the Deathly Hallows: Part 1, and The Golden Compass, for which it also won an Oscar. The studio has multiple BAFTA awards under its belt as well.

Woods can not only speak with some authority on the future of entertainment, but he's also one of the people shaping the very industry of which he speaks. Woods believes in virtual reality, and if Woods believes, then Framestore is on board.

The studio's Game of Thrones-themed experience, called Ascend the Wall, proves that much. And if it's any indication of the ways virtual reality and big budget entertainment are set to collide, then the next few years are going to be thrilling.

A song of ice and vertigo

Ascend the Wall is an incredibly immersive experience that should have Game of Thrones fans salivating with jealousy of anyone who's tried it.

It uses Oculus Rift to send players to the top of the gigantic ice wall that divides Westeros north and south lands. But unlike other Oculus Rift experiences, it engages more than just your sight.

Users don the VR headset and step into a metal enclosure not unlike the elevator that the men of the Night's Watch use to ascend the wall in Game of Thrones. The floor rumbles as the virtual elevator users see inside Oculus Rift begins to rise, and cold air buffets their faces. Headphones pipe clanking sounds and gusting wind into their ears.

At the top of the 800-foot virtual wall users witness "wildlings" from the north catapult fireballs their way, then plummet down the wall's sheer face. Given how immersive Oculus Rift is and how many senses are being engaged, the sense of vertigo is absolutely stunning. and it's truly terrifying. Put it this way: they make you sign a waiver before you can do it.

Framestore showed off Ascend the Wall initially at South by Southwest in March before bringing it to the Game of Thrones season 4 premiere in New York. They brought over 100 headsets with them to SXSW, around 10 of which were broken. Woods considers that pretty good, taking into account the fact Framestore was using Dev Kit 1, the earliest version of Oculus Rift that was available to developers.

"They're a Kickstarter-funded thing. They're not meant to have queues that are going to have like tens of thousands of people like we had at [SXSW]," Woods said. He added that, "there literally aren't enough Crystal Coves or DK2s in the world."

The headset's display resolution has improved with subsequent versions, but Woods said discussing the specs is missing the point.

"People can get over seeing the pixels if the quality is good enough," he said. "We haven't had a single person come out of that initial 10,000 that were like, 'Oh, the pixel quality was bad' or 'I wish there wasn't any compression' or 'I wish the definition was better.' It's like, it doesn't matter. As soon as people adjust their focus to, 'Oh yeah, that's real,' then it's real."

The screams coming from each booth as people ascended the wall and fell down the other side - taking all of two minutes per user - were real enough. Framestore created Ascend the Wall to prove what it can do with VR, and Woods said the studio is happy to put new tech in the spotlight for once.

"We won an Oscar for Gravity [in March]. It's a big deal, but it's brilliantly established ways to do visual effects," Woods said, excited. "We don't normally get the chance to put the hardware or the things that get us to that place on show."

The geeks were right

Now that Framestore has conquered Game of Thrones, what's next?

"There are endless things we can do from that point," Woods said. "Hopefully we're having this conversation again in six months when you see what we've got coming next. We've got A-list Hollywood directors genuinely interested and working with us on completely reinventing how narrative storytelling works."

Of course, Oculus Rift was just purchased by Facebook, and though for now it continues to operate independently, fans are skeptical. Thankfully the ball is no longer just in Oculus's court; competitors are beginning to spring up. So either way, VR will go on. And Framestore plans to lead the charge.

"The interest from [Ascend the Wall] alone, we could create a VR department already," Woods said.

"We're privileged to see three or four different bits of technology already that we know will be where Oculus are two years down the line," he continued. "The technology will leap ahead, but narrative storytellers have to keep up. The geeks are there. The geeks will always win the race."