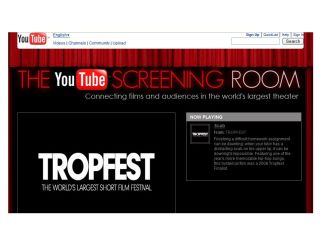 The first company to sign up to YouTube's feature film initiative has been announced and it's MGM Studios.

The company which paved the way for blockbuster films in Hollywood, with its release of Ben-Hur (1925), Gone With The Wind and

The Wizard Of OZ

There's been no announcement from the company as to what films will be making their YouTube premiere, but recent movies like the remake of Halloween and CGI flick Igor (both 2008) are owned by the company.

Speaking about the partnership, Jordan Hoffner, YouTube's Head of Content Partnerships, said it was a 'watershed moment' for the company: "We are really happy about MGM. They have an incredible library."

Unfortunately, one of MGM's major assets won't be making an appearance on YouTube and that is Bond, James Bond.

Jim Packer, MGM's Co-President of Worldwide Television, admitted: "I don't think you are going to be seeing a James Bond movie on YouTube.

"That's a very special franchise for us. We are very cautions about where we put those movies." So, YouTube isn't special enough for MGM then.