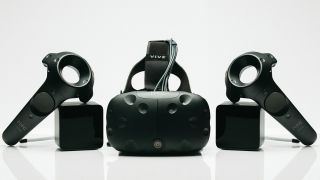 Last but not least, Valve hopes this move will help VR gain more traction by lowering the cost of entry for developers.

"We believe that the largest value for our customers and for Valve will come from allowing SteamVR Tracking to proliferate as widely as possible," says Valve in a FAQ. "The existence of more SteamVR-compatible devices will make the SteamVR community more valuable for customers and developers."

Valve intends today's announcement of royalty free use of its SteamVR Tracking to kickstart the development of peripherals for its HTC Vive headset.

It's possible that some manufacturers could make their own VR headset using SteamVR Tracking, but it appears Vavle and HTC's goal is to build a robust offering of third-party accessories for the Vive.

While SteamVR Tracking is royalty free, developers looking to use the tech will have to shell out $3,000 for a developer kit and in-person training in Seattle, Washington. The dev kit includes two base stations, various sensors and other tools to start making games and VR experiences.

The Oculus Rift also includes tracking technology, but the company hasn't made its technology free to use. The Rift, however, will support the use of up to four tracking sensors, which is arguably more accurate than the Vive's two.