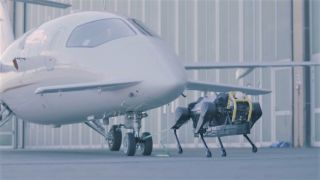 The increased use of robots is often seen as a threat to human jobs. Ford's delivery robot may help improve efficiency, but there will be concerns about delivery drivers being put out of work. There are, however, plenty of instances of robots completing tasks that a human simply couldn't -- like pulling a plane, for example.

And that's precisely what the quadrupedal HyQReal robot can do. This Italian-built robot is strong enough to pull a three-ton plane down a runway. The impressive feat can be seen in this video:

This immensely powerful robot dog is the work of the Dynamic Legged Systems Lab (DLS) at the Istituto Italiano di Tecnologia (IIT), and it is the successor to the smaller HyQ from a few years ago. It was created in conjunction with Moog – but not the company famed for its synthesizers and theremins.

Having the power to tug a 3,300kg Piaggio P180 Avanti passenger plane is the impressive calling card of DLS's flagship torque-controlled hydraulic four-legged robot, and it is a far cry from the slightly creepy look of Boston Dynamics' SpotMini quadruped. While the Boston Dynamics robot is lithe and svelte, the HyQReal is solid and stocky, its frame oozing strength.

Although the robot's strength has been highlighted by its plane-pulling capabilities, in the real world it is destined for other tasks – supporting humans in emergency scenarios, and helping in disaster response, agriculture, decommissioning and inspection. Its titanium body is 3D printed, and it boasts a reinforced roll-cage. Water- and dust-resistance mean it is resilient to many terrains and environments.

Weighing in at 130kg, standing 90cm tall and 1.3m long, HyQReal is sizeable. A portion of the weight is accounted for by its battery which is a 15kg unit, and provides up to two hours of power.

There are two hydraulic pumps – one for the front legs and one for the back legs – and it is here that Moog's Integrated Smart Actuators are used. There are a total of 12 hydraulic joints, and the robot if kitted out with LIDAR, RGB-D and stereo cameras to help perceive and make sense of its surroundings. Just as we have seen Boston Dynamics' robots recovering from being pushed around, so HyQReal's creators say that this quadruped should be able to right itself in the event of a fall.

Rubber feet give the robot grip – quite a lot of it, as the plane-pulling illustrates – and one of its key strengths is the fact that it can be wirelessly controlled. For now, we see operators controlling the HyQReal from relatively close quarters, but there is little to stop this range from being dramatically increased to allow for operations in areas where it would be dangerous or impossible for humans to be – the site of the Fukushima disaster is cited as an example.

HyQReal is very much a work in progress at the moment, and there is still a lot of work to do. Future plans include adding an electronic arm which could be used to carry or grip objects, and generally make the robot more useful.